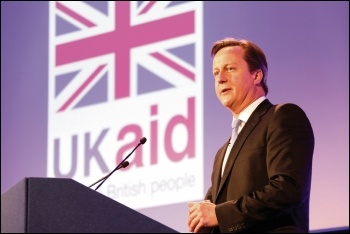 Prime Minister Boris Johnson sidestepped another humiliating government u-turn - over extending school meal vouchers - by announcing in parliament the merging of the Department for International Development (DfID) into the Foreign and Commonwealth Office (FCO).

Playing to his cheering audience of right-wing backbenchers and the Daily Mail, Johnson chimed: "For too long, frankly, UK overseas aid has been treated like a giant cashpoint in the sky, that arrives without any reference to UK interests."

In fact, most UK government aid does not go to the world's poorest countries. Much overseas aid has long been used to secure trade deals and further the geopolitical interests of British capitalism. Johnson wants to use aid as a political tool to counter China's growing influence in the neo-colonial world.

The DfID was established in 1997 by the Blair government to separately administer aid following the Pergau Dam scandal. This scandal involved the 1980s Thatcher government committing to spend an eventual £234 million of aid to build an electricity generating dam of dubious economic value in Malaysia, in exchange for a lucrative arms deal. In 1994 the High Court ruled the deal "unlawful".

The Blair governments used the aid budget as 'soft power' to pursue the economic and political ambitions of British capitalism. Under the Cameron Tory-led governments the aid budget was formally refocused to promote 'Britain's national interest'.

Currently, a quarter of the DfID's £15.2 billion budget is spent by other government departments, including the FCO, and used to advance trade deals and so forth.

The UK government is spending an increasing amount of Official Development Assistance (ODA, ie aid) on domestic refugee support, which has risen sharply from £7 million in 2009 to £378 million in 2017. ODA rules are so vague that the government can expand temporary refugee 'sustenance' to longer-term 'integration'.

Moreover, as the aid budget is set at 0.7% of Gross Domestic Product (GDP - total economic output), the sharp fall in GDP, due the coronavirus pandemic, is likely to cut aid by £2.5 billion.

Illegal capital flight wouldn't be possible without the existence of tax havens, and the biggest network of tax havens is centred on the City of London, operating through the British Crown Dependencies and Overseas Territories.

While complaining about the "giant cashpoint in the sky," Johnson is presiding over a system that organises mass theft from poor countries.