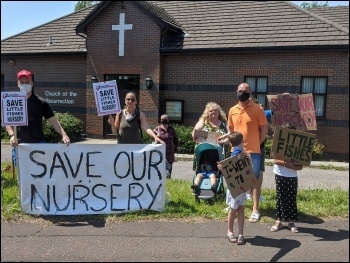 On 29 June, Socialist Party members gathered with local residents outside St Mellons Church of the Resurrection to protest its eviction and closure. It is widely recognised as one of the only affordable and quality childcare facilities in the area.

A petition has gained nearly 600 signatures. It could affect the all-important start to education for many local children, and leave numerous nursery staff facing redundancy.

The church has responded to pleas to reconsider its decision by explaining that it is inappropriate to house the nursery in a church which is open to the public. However, steps can be taken to ensure children's safety within the church - a separate creche facility within the church is still permitted to run.

Local grandmother and campaigner, Georgina, told the Socialist Party that the decision has caused uproar: "This left the nursery staff shell-shocked. Not only entering a time of great uncertainty with the coronavirus pandemic but also facing redundancy. It also left multiple parents questioning where they could place their children in affordable childcare."

The Socialist Party argues that all parents should be able to access decent and affordable childcare, and that all children are entitled to a solid start to their education.

A survey by Coram family and childcare trust found that childcare costs have risen by 5% in the last year alone, and the current systems of childcare support, such as Flying Start in Wales, are complicated and difficult to navigate. This feeling was echoed by parents who attended Wednesday's demonstration.

All childcare services should be fully funded and run under accountable, democratic committees that include representatives of service workers and users. Therefore, the Socialist Party demands that Cardiff Council work with the nursery workers and concerned parents to find a solution to this problem.

Several councillors have responded to emails regarding the nursery closure saying that they will investigate the situation and 'try' and find an outcome that satisfies all parties. Parents and workers must not be fobbed off!

If the church will not reconsider the eviction, then the council must find alternative premises so Little Fishes nursery can continue to serve the parents and children of St Mellons.