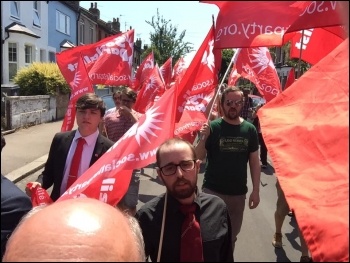 Always campaigning, Ken's family secured free parking from the council on the day so more people could come.

You can read Ken's obituary 'Ken Douglas - a tireless and determined fighter for socialism' on the Socialist Party website.

Ken was our national treasurer and Socialist Party members have donated thousands of pounds for his memorial fund. This will be used to buy or do something that furthers the work of the Socialist Party in Ken's memory.