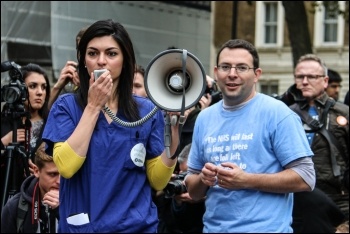 Tory chancellor Rishi Sunak promised us all that the government would give the NHS "whatever it needs." Now he's refusing to stump up the cash.

NHS England has reportedly requested £10 billion to stay afloat during the next wave of Covid-19 and the hard winter months. Really, this should be a minimum, given the years of austerity and privatisation that emaciated the service before coronavirus. Sunak says no.

And what about frontline workers themselves? Health Secretary Matt Hancock has promised a "reward" for NHS staff. But he refuses to commit to the reward they most need and deserve - a decent pay rise and more staff. Meanwhile, Boris Johnson ineptly tried to blame mass deaths in care homes on care workers!

NHS workers spoke to the Socialist about the Tories' treachery. "Yet another betrayal from this government of liars," said one ancillary worker. "They will hand over billions to their mates in private companies like Serco - who fail again and again. But when they are asked for money for the NHS, suddenly the coffers are bare."

"The only thing the Tories can be trusted to do is to attack both the pay and conditions of health workers, and the NHS itself," said health worker Roger Davey. "To secure a decent wage increase, and a fully funded, publicly owned NHS, we will need to fight for it - which will have to include industrial action."

"Typical hypocrisy from the Tories," said Matt, a nurse. "They stand and clap for PR reasons while continuing to attack, privatise and destroy our NHS. Staff are called heroes, yet forced to turn to use food banks due to poverty wages. After the 72nd anniversary of the NHS, never forget the Tories fought the creation of the NHS, have tried to get rid of the NHS ever since, and are doing everything they can to sell it off today."

"The promised additional hiring was conducted through the back door, on a casual basis. We haven't gained the reinforcements we need," said porter William Jarrett.

"Temporary contracts have lapsed. Workers who sacrificed their safety and fought valiantly alongside permanent staff have been sent home for good. Student nurses who cared for patients have been dismissed as worth a fraction of the value of their colleagues. Workers are burned out and exhausted, and totally demoralised by the prospect of an imminent second wave."

"We are tired but we are also angry. We've stood together as workers to fight this pandemic, despite the idiot behaviour of our government," said radiographer Maggie Fricker.

"It's made us aware of our strength, and we won't be taken for granted. They think they can brush aside what we've been through and offer us nothing. They need to think again."

"How low can the Tories get, promising funding then trying to wriggle out of it with their smoke-and-mirror tactics? All care homes should be publicly owned, fully funded, democratically controlled, with decent pay and conditions for all workers."

"Health workers had the NHS winter crisis - trying to treat patients with dignity, but without enough staff, beds or resources. Then Covid-19 hit like a bombshell, causing upheaval, anxiety, many to become ill and 300 to die," said Jon Dale, secretary of the Unite union Nottinghamshire NHS workers' branch.

"Health workers haven't gone through what we have to be treated like this," said porter Len Hockey. "We are angry at being put at risk and patronised. We are part of the six-million-strong trade union movement.

"This now needs to be met with preparation and organisation by our union leaders for national industrial action."