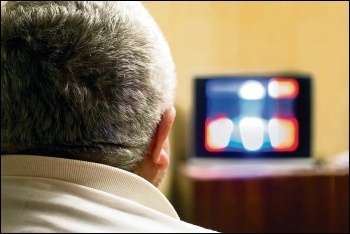 The licence fee should be replaced by funding from general, progressive taxation   (Click to enlarge)

The BBC has announced it will be knocking on pensioners' doors to collect £157.50 from 1 August, in pursuance of this Tory government's policy of withdrawing free TV licences for over-75s.

Most pensioners have worked all our lives creating the wealth now in the pockets of the billionaires who exploit the economy from their luxury yachts in some sunny climate. Tens of thousands of us have died in the pandemic, and millions are locked down fearing for our lives, with only the TV to give us an inkling of what's going on in the world outside.

It is clear that pensioners are pawns in this government's vicious campaign. Free licences for over-75s were introduced in 1999, with the government to pay the bill.

In 2015, Tory chancellor George Osborne passed responsibility for the costs onto the BBC from 2018. The corporation's bosses accepted this, providing they could increase everyone's licence fees in line with inflation from 2020.

Last year, the BBC announced the concession would be scrapped, except for those receiving pension credit benefits. Currently, 600,000 of those entitled don't claim. And BBC director of policy Clare Sumner immediately caused uproar, stating that "outreach" workers from infamous outsourcer Capita would visit pensioners at home to ensure we pay up!

This is part of the Tories' ideological determination to discredit public broadcasting - despite the BBC's value to capitalism as a state propaganda machine, proven once again during the coronavirus outbreak. At the same time, they want to whip the BBC even further to the right, and commercialise more of its profitable sections for their money-grubbing friends.

The Tories are even prepared to set a precedent of decriminalising non-payment of what is, in effect, a regressive tax. According to 'Culture Secretary' Oliver Dowden, they fear "it will be an own goal of epic proportions to start hauling people over 75 in front of the courts."

If the Tories themselves fear this issue blowing up, where are the trade union and Labour leaders? They should demand no fees for pensioners as a minimum. Really we need to end the licence fee for all, to be replaced with funding from general taxation - and genuine democratic control of the media.