As live performances are cancelled, there could be a jobs meltdown in the whole theatre and arts sector unless the government steps in. Under pressure, the UK government announced a £1.5 billion subsidy, but that has not been used to defend jobs.

The Welsh government has been allocated £59 million, which should be passed on to arts organisations specifically to save jobs. The government should insist that all funding will be dependant on the money being used to save jobs. Management at the Wales Millennium Centre has refused to rule out job cuts, even if extra funding is forthcoming.

Jason Camilleri, a Wales Millennium Centre worker, helped organise a protest outside the Welsh Senedd (parliament) against job cuts in museums, arts and venues on 18 July. 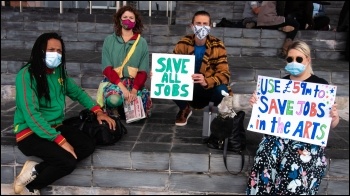 Protesters brandished signs stating the basic demand of 'save every job'. This is the collective message of the organisers. However, one sign resonated loudly for me, it read: 'Theatre is more than just buildings, its people'.

Thousands of jobs are at stake. To name but a few: Exeter Northcott Theatre, 50% of staff; Tobacco Factory in Bristol, 70% of staff; London's National Theatre, 400 staff - not to mention the losses at regional theatres and venues across Wales.

Hopes were raised when it was announced that a £59 million rescue package for arts and heritage was heading to Wales. However, with redundancies already taking place, announcements around the rescue package have been slow and fraught with confusion.

The idea of a union supporting an entire workforce within an organisation does not seem to exist. There are specific unions for performers, but the industry is so much more than that. The key is immediate action for the industry to become unionised, and a concerted effort must be made to ensure that this happens.

The current emergency needs action. There are no guarantees that any job is safe as a result of this fund. And there is no word from the Welsh Government on whether it intends to use this fund to protect livelihoods.

If you are waiting on the announcement before you speak up, the opportunity may be lost, along with thousands of jobs. The time is now.