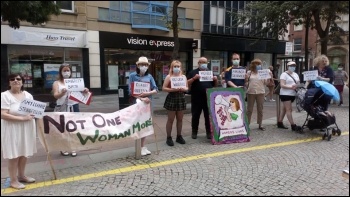 Women and men attended a vigil in Doncaster on 22 July organised by the Women's Lives Matter campaign, after the alleged murder of five women from the town in the last two months. Eight have died across South Yorkshire.

Domestic violence and abuse has got even worse during lockdown.

Women's Lives Matter has been contacted by a lot of press - asking why Doncaster? Why have there been so many murders of women in Doncaster?

To us it's fairly simple. It's what happens when you have a community ravaged by cuts.

Doncaster doesn't have a Citizens Advice Bureau. The Women's Aid got cut. The only solicitor that offered 'first 30 minutes free' consultations stopped.

Women going through the family court with a perpetrator have to travel to Sheffield, because Doncaster family court was closed. It's a forgotten-about northern town wracked with poverty and with little services.