Why I joined the Socialist Party - Covid changed my outlook 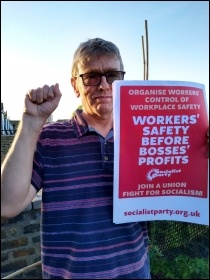 Protesting against unsafe returns to schools and work   (Click to enlarge)

I joined the Socialist Party a month into the lockdown. Previously, I had always avoided politics and tried to remain neutral. Covid made me change my entire outlook.

I work as a recruitment consultant. The business I work for has a typical cut-throat approach.

In my role, I have seen staff, temporary and permanent, abused and exploited by bosses. Everything we did was purely in the interest of profit and in utter disregard of the health and wellbeing of workers and their families.

I even saw a cleaner sacked because they were so hungry they ate out of a bin. All because they didn't have the money to feed their family and themselves.

To me it's clear as day that this is the result of capitalism.

Money means power and in today's society the rich have proven they don't deserve power. How can they when a handful of billionaires own most of the wealth, but millions live in poverty?

Seeing all this, and feeling like I couldn't help, had me awake till 3am during lockdown. That was when I found the Socialist Party website - socialistparty.org.uk.

Since joining I have really felt welcome and learnt a lot. It has provided a support network and allowed me to feel like I am really helping to support others.

I would urge anyone to attend a meeting and see what it is like. There is no hierarchy, no judgement and everyone gets their say. Something hard to find these days.