Southampton Socialist Party was live, in two gardens and on Zoom from many homes on 30 July. We discussed the revolutionary struggle in South America and the relevance of Leon Trotsky's theory of the permanent revolution.

We also heard reports from this week's campaign stalls. The struggle continues. 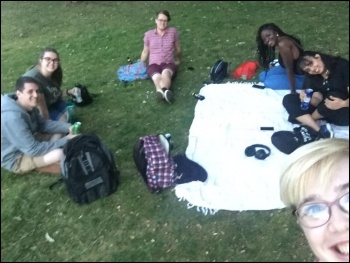 In west London we hosted a hybrid meeting. Socialist Party members joined via Zoom and six of us met socially distancing in a park, logging in on a laptop.

It was great to take part in the meeting as a group. We had a few hitches along the way. But we got there. Definitely worth repeating.