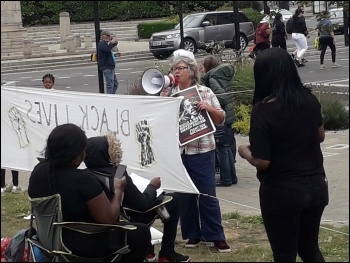 Local examples of police brutality were raised, including the rise in stop and search. A man was tasered in his own home by police in Tottenham.

Speakers pointed to the complicity of London mayor Sadiq Kahn, who has responsibility for the police. They put out a warning - black people, mostly Labour voters in London, might not support Khan in the next mayoral elections if he continues to turn a blind eye to the despicable treatment black people receive from the London police.

Edmonton has never had an Afro-Caribbean community centre and a petition went round to demand that Enfield Council provides one. The campaign warned local businesses that they could face boycotts, following the refusal of some local shops to display Black Lives Matter leaflets.

North London Socialist Party attended the protest and we were invited to speak. We pointed out that working-class people have to rely on our own strength.

We pledged our solidarity, saying that capitalism benefits by dividing the working class on race. Only if we come together can we fight capitalism and inequality.

We still live in the same capitalist system responsible for slavery, and the ruling class that got rich from it continues to keep black people oppressed, while stirring up racism. Socialist Party members said that the Black Lives Matter movement has frightened the ruling class - and they need to be frightened.

The organiser finished by saying black people couldn't do this on their own, and called for more solidarity in the future.