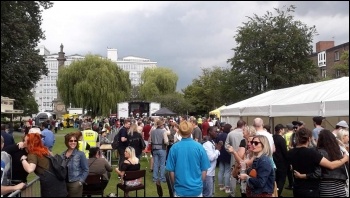 'Engage for Change' held an online, virtual festival on 25 July. Engage for Change aims to educate young working-class people on the role of trade unions through music and the arts. It's an initiative of Hull and District Trades Union Council, the body that brings together the trade unions in the city.

This year's physical festival, as with most other major events, was cancelled due to Covid-19. We felt it was important to put on a virtual festival.

The virtual festival had bands, solo artists, and poets plus discussions on Black Lives Matter and the impact of Covid on the music industry. We heard about strikes and workers' disputes on NHS pay, Tower Hamlets council contracts and British Airways jobs.

The event videos had over 16,000 views live and since, a tremendous success. It gives Engage for Change a really strong basis for more events and festivals.