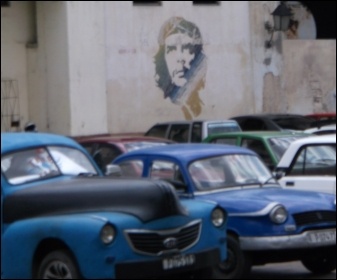 It also gave sanctuary to the MS Braemar, a cruise ship carrying 682 mainly British tourists, which had cases of coronavirus on board. It had earlier been denied entry by several Caribbean countries According to sources in the British government, the United States administration had refused to help.

Cuba has done this in the face of a six-decade, brutal trade embargo by the US - the reality of which has been shown again during the pandemic. A shipment of 100,000 facemasks, diagnostic kits and ventilators from China was blocked en route to Cuba because the cargo carrier's owner is a US-based company subject to the embargo.

The embargo was put in place in 1960, in response to Cuba's revolutionary government nationalising American-owned companies, without compensation, that year. The nationalisations followed the revolution that overthrew US-backed dictator Fulgencio Batista and the super-rich, casino owners, gangsters and bosses who had dominated and exploited Cuba. (See 'Cuban revolution at 60: defend the gains and fight for workers' democracy')

Although the Cuban revolution was not based on the working class, and the regime the revolution ushered in has been bureaucratically run from above without the workers' democracy which genuine socialism has to have, it is one of the great, historic hammer blows to capitalism.

A combination of the pressure of the Cuban masses and hostility from US imperialism led to the new Cuban government nationalising most of the economy. This included all the major industries, land and much of the private property owned by US capitalists and, in some cases, organised crime. The hostility went as far as supporting armed intervention in 1961, in the infamous Bay of Pigs invasion, as well as subsequent terrorist attacks carried out by the CIA and right-wing Cuban exiles.

It ushered in huge advances in the day-to-day lives of the Cuban people - gains which, as its management of the pandemic shows, largely last to this day. The social gains include free healthcare and education. Life expectancy is now almost two decades longer than in 1959 and infant mortality is lower than the United States.

There are now 15 times more doctors since the revolution, with the best doctor-to-patient ratio in the world. And the medical internationalism it's shown during the pandemic is nothing new - since the 1960s 400,000 medical professionals have provided healthcare in 164 countries. Cuba even had brigades ready to help in the US during the Hurricane Katrina disaster in New Orleans in 2005, but the US government rejected this help.

Due to the country's completely nationalised medical system, and also difficulties obtaining certain drugs due to the embargo, Cuba has also made impressive biotech innovations. A Cuban anti-viral drug Interferon Alfa-2B that has been used since the 1980s to help patients fight viruses, is now helping patients recover from different stages of Covid-19. Cuba says that globally, there have been more than 70 requests for pharmaceuticals it has developed.

The trade embargo is called 'el bloqueo' in Cuba, referring to the early years when it was enforced by a US naval blockade. It's estimated to have cost Cuba $1 trillion.

Since 1992, the United Nations general assembly has passed a resolution every year condemning the embargo and declaring it in violation of international law, with the United States and a handful of its allies voting against each year.

There was a very limited thaw in Cuban-US relations under the presidency of Barack Obama, but Donald Trump has rolled these back and even strengthened the embargo, implementing 90 economic measures against Cuba between January 2019 and March 2020 alone. He has tried to pressure other governments to reject Cuba's help during the pandemic.

The embargo bit even harder in the 1990s with the collapse of the Soviet Union. It forced Cuba into what became known as the 'special period', which in reality meant austerity measures, as the vast resources and funds channelled to Cuba from Moscow dried up.

But the Soviet Union's influence, combined with the absence of genuine workers' democracy from the start, meant Cuba's planned economy developed into a top-down bureaucratic model, similar to the 'deformed workers' states' in eastern Europe, and the Soviet Union itself.

The programme of the Socialist Party and the Committee for a Workers' International is for a 'political revolution' to overthrow the Cuban bureaucracy, and the implementation of workers' democracy, with elected representatives - nationally, regionally and locally - being accountable and subject to instant recall. We call for these elected representatives to receive only the average wage of the workers.

The revolution in 1959 had total support from the workers and poor masses of Cuba, and many of the revolutionaries, led by the example of Che Guevara, were incredibly self-sacrificing. Most officials took average wages and refused any perks. Cuba hasn't ever taken on the same horrific character of Stalin's Russia.

But because the revolution was achieved through guerrilla war and there was no revolutionary party like the Bolsheviks in Russia in 1917, there has not been the key workplace and political democracy mentioned earlier. Particularly since the collapse of the Soviet Union in 1990, this has left it open to attack and exploitation again.

The planned economy and socialist gains of the revolution have shown again during Covid-19 what can be achieved by breaking from capitalism and giving a glimpse of what could be achieved under genuine socialism.

Cuba rightly has the support and sympathy of workers and young people around the world. But today Cuba is a country at a crossroads. Both the pride in its remarkable revolutionary past, and the problems and threats of the present, can be seen when visiting the country.

Cuba has suffered the hammer blows of the 2008 world recession, and the drying up of cheap oil from chaos-ridden Venezuela which helped to sustain Cuba through its links with former Venezuelan president Hugo Chavez and his left populist government. Now Covid-19 is compounding the economic problems by hitting tourism in particular which, since the 1990s, Cuba has come to rely on more and more. The pandemic has hit the state, which controls much of the tourism industry, and the many workers who are employed in the sector.

The need to oppose and build an alternative to the increasing threat of capitalist restoration, and to fight for genuine workers' democracy and a socialist planned economy in Cuba in these tumultuous times, is more urgent than ever.

This movement, defending the gains and winning new ones, fighting alongside the working class and youth who are increasingly moving into action all over the world, could build a real socialist alternative to capitalism. And this movement, taking inspiration from the Cuban revolution, while learning its lessons, can win.