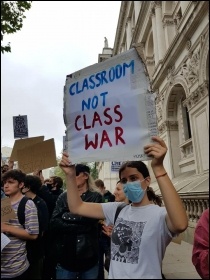 While A-level students were dealing with downgrading, I and many of my peers were yet to even receive our BTEC grades! This delay not only adds mental stress, but means if we receive marked-down grades we might not have enough time to appeal before university deadlines.

As a working-class student, I already faced struggles. I had to rely on a poorly financed bursary system that barely covers food and travel on a week-to-week basis.

I had to take a year off education before attending college to work full-time just to put myself through supposedly free education.

No A-level students were expecting the severe downgrading that occurred. Grades had been predicted on what the tutors expected, yet many students received much under this.

But most private schools and colleges were hardly affected by these grade cuts. The places hit hardest were in working-class areas.