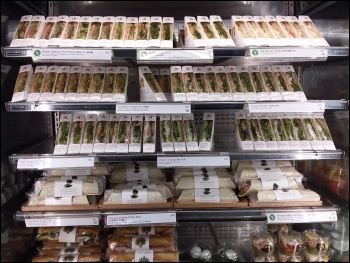 Nearly 300 new Covid-19 cases have been detected in Greencore Food Distribution in Northampton in just one week.

The distribution outlet provides packaged sandwiches for supermarkets such as Marks and Spencer, Tesco, Asda and Waitrose.

With company profits of £35 million since April this year - and an overall revenue of over £700 million, not to mention an 'emergency Covid loan' given by the government - it's hard to justify the company's stingy acts on staff furlough pay, £95.60 a week sick pay and proper safety precautions.

Northampton Tory council's director of health Lucy Wightman stated in an interview with the Northampton Chronicle that the outbreak in Greencore was not the fault of the management, that the safety structure "wasn't to blame", and that she sees that "there are no concerns about the operational management of Greencore".

Instead, she blames the workers and how they live. Greencore workers have expressed their disgust with these accusations, many of whom are Eastern European and have been forced to live in cramped housing, travel by bus and work through illness to get by.

Leader of the Tory council Jonathan Nunn also lets management off the hook, blaming the staff. But in reality, the lack of PPE and social distancing in the workplace means management are the real culprits.

It is scandalous to blame 2,100 staff over the lack of PPE, bullying management, poor pay and awful cramped working conditions.

It is no coincidence that working-class communities in Northampton are overwhelmingly suffering the brunt of the Covid crisis.

Workers must not pay for the Covid crisis - in jobs or lives. This is a clear case of putting profits before safety.

Northampton Socialist Party: How can we ensure Corbyn's policies are delivered?