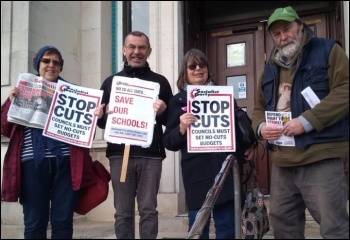 The pandemic cost the council £21.6 million more than they got in government grants. It will want more cuts.

Eight of Hampshire's 45 libraries are set to close, putting 50 jobs at risk. All remaining libraries will have their hours reduced by 20% on average.

Four community libraries will lose their council funding and be run entirely by volunteers. How many of these would be able to stay open?

The cuts affect the poorest the hardest. Hampshire Unison union must mount a campaign to save the libraries and other services.

Services have already been severely cut, and austerity is not over for local government. Councils need to demand the return of funding which has been withheld by the government, so they can set a budget that meets the needs of the people and restore our lost services.

Nottingham City Council, where Labour has 50 out of 55 councillors, has asked for voluntary redundancies, and announced further job and service cuts.

Like other councils, it is considering cutting everything except statutory services and threatening another emergency budget in October.

The council has salami sliced cuts since 2010, while getting involved in commercial ventures, including investing in property in other cities. None of the Labour councillors have voted against this.

We call on Labour councillors that want to stand up for the working class, to vote against the cuts when they come up in October, and start building a campaign to defend services now.