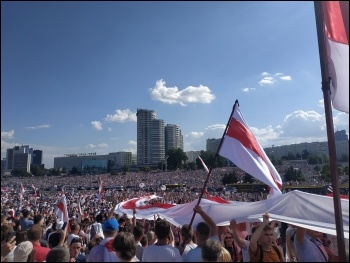 Unprecedented numbers have been out on protests across Belarus, with reports of 200,000 demonstrating in the capital Minsk on Sunday 16 August.

Mass strikes have continued at major workplaces, like Belarus Potash, and the truck manufacturer, BelAz.

These workers have been joined by journalists from the Belarusian state media declaring they are unwilling to continue lying on behalf of the regime.

There have been reports of increasing numbers of police and other state forces resigning, and making public their refusal to obey orders to attack demonstrators.

The mass protests and strikes were sparked by President Aleksandr Lukashenko declaring himself the winner over Sviatlana Tikhonovskaya in a presidential vote widely considered as being totally rigged.

This has come in the context of a failing economy and collapsing confidence in Lukashenko's thirty-year-old regime.

There has been terrible repression, with protestors beaten, arrested, and hauled away by OMON special police, held for a few days and then released.

There have been deaths. Yet, despite this, the mass demonstrations have taken on a 'carnival' atmosphere.

So many strikers and demonstrators say "fear has gone". As happened in Tunisia and Egypt during the 'Arab Spring', this state brutality can arouse yet more anger.

While rumours abound that Lukashenko is preparing to seek asylum in Russia, rumours also circulate of an intervention by Russian troops.

However, the scale of the popular uprising makes any such intervention much riskier for Vladimir Putin, potentially inflaming the mass protests against Putin himself developing in Russia.

Tikhonovskaya's immediate demand for a rerun of the election could gain popularity. While a simple rerun would only pit pro-capitalist candidates against one another, Lukashenko being forced into granting that concession would be a concrete symbolic victory for workers that could fan the flames of a full-scale revolution.

Widely acclaimed as the winning candidate, Tikhanovskaya, who has fled to Lithuania following gruesome threats to her children and her imprisoned husband, initially called on protesters to go home in the face of brutal police attacks.

But as the demonstrations have swollen into what appears to be an unstoppable force, her running mate, Maria Kolesnikova, holds out hope of Tikhanovskaya being brought back to occupy the presidency.

Russian state media has taken the attitude that Lukashenko's departure is a matter of time. Capitalist bosses in the EU regard Belarus in the same manner in which they preyed upon Ukraine - as another business 'opportunity'.

The country has resources they can exploit, including cheap labour. European powers, the US, and China, all have an interest in what happens in this geopolitically important state.

Without a socialist alternative emerging from the mass movement the country risks becoming a pawn in the struggles between the larger economic powers.

These are crucial days for the Belarusian working class in getting rid of the rule of a dictator and of the oligarchs who have acquired state industries to accumulate profit for themselves.

Nearly 50% of Belorusian industry is still in state hands, but control should be taken out of the hands of bureaucrats by workers in the industries.

There should be no illusions that privatisation would lead to more efficient, better-paying industry.

The resignations from the police and state security forces have, so far, been individual acts, weakening the state but not signifying a situation of dual power, from which the working class could take over running society.

But as workers put their stamp on events, through bringing the country to a halt and winning over the middle layers in society, many of whom are already actively involved in protests, they will need democratically elected workplace and neighbourhood committees to link up locally, regionally and nationally.

These workers' 'councils' could be transformed from being instruments for conducting the struggle into the democratically elected bodies for implementing workers' majority rule.

A revolutionary constituent assembly would be the best way of drawing up a new way of running society with democratically elected representatives and proposals coming from political representatives of workers themselves.

A full programme of democratic rights, along with the nationalisation of all large private industry under a democratically controlled plan of production, distribution and exchange is necessary.

Immediately, what is needed is a fighting organisation, a party of workers and a leadership with a revolutionary socialist outlook to coordinate the present mass movement.

This would advocate representatives of committees and councils across Belarus through which workers could set themselves the task of arranging a defence force against Lukashenko's OMON and other state forces sent against them.

The fight for a coordinated, independent, socialist answer to the crisis of Belarusian capitalism should be accompanied by an appeal to the workers of Russia and elsewhere to follow their example and link up their struggles.

The bravery of Belarusians in taking to the streets and downing tools cannot be doubted. All those who see it will urge: "Trust that bravery; trust the power. Take the next step towards revolution!"