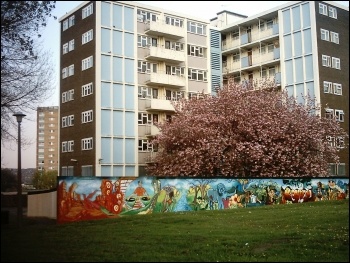 Tenants and residents in Little London, an inner-city, Leeds council estate, are celebrating. Private developer Engie has just withdrawn its application to build an 18-storey monster block of unaffordable flats on a valued green space, locally known as the Mound.

Little London is a densely populated. Poverty and overcrowding are rife. So when this application was first announced, nearly two years ago, local people were furious.

Loads of people came to public campaign meetings and talked about the lack of local amenities and safe spaces for their children to play.

They also expressed concern at the loss of over 50 mature trees - a disgrace in a city that has declared a 'climate emergency'.

It took much hard work to get the developers to back down. Even after having the application thrown out last August, the developers attempted to bypass local democracy by appealing to the government's Planning Inspectorate.

Without a concerted campaign involving meetings, protests, petitions and lobbying, this development would almost certainly have gone ahead.

Having beaten back the developers, we are determined to turn this victory into a beginning, not an end.

Plans are now in place to use this site for food growing initiatives and outdoor learning projects for local children.

We hope that the networks established throughout this campaign will be used to strengthen local tenant and resident organisation, so that solidarity can built around community issues in the future.