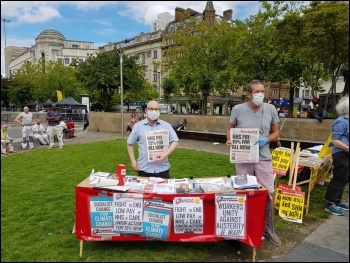 Your donations help us campaign on the vital issues facing working people. On 8 August, NHS workers were protesting all around the country, infuriated that many are not receiving decent pay increases this year.

They welcomed our backing for their 15% pay rise demand. Joe Fathallah from Cardiff East Socialist Party sent us in £32: "From the nurses' pay protest. People were giving me fivers and tenners for the Socialist."

£80 came in the last week for our coronavirus appeal, including £40 from the Black Country. If you haven't donated yet, now is the time. Go to socialistparty.org.uk/donate and put 'coronavirus appeal' in the comments.

Jon Dale from Mansfield got £9 from a thankful regular reader who he was unable to visit with the Socialist during lockdown.

We appeal to all our readers to get a subscription to the Socialist. An e-subscription is now available - see box.

Thanks to Joao who gave £5: "For a better and fairer world". And to Matt from south west London, who gave £40 with the message: "Afraid I can't afford too much at the moment".

Large or small, all are welcome. In fact, the over £800 we raised in Fighting Fund last week was all from similar small donations.