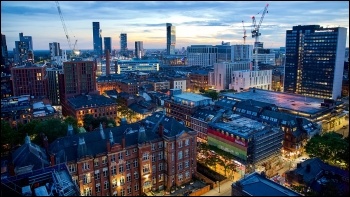 Manctopia is a four-part documentary about housing in Manchester, filmed over the course of one year. It is very powerful viewing. It even mentions Marx, Engels and the Communist Manifesto in describing some of the historical development of Manchester.

As the title makes plain, Manctopia shows the huge profits being made by property developers in the city centre.

It also shows the rottenness of the housing situation in Britain today. It ranges from showing the multi-millionaire property developer who stands to make £12 million profit from redeveloping part of the Piccadilly area in Manchester city centre, to Christina - a single mother of two who, despite paying her rent on time every month for five years, is evicted, made homeless, and is forced to move in with her mother.

While huge profits are made by property developers, local people are being forced out of homes they have lived in for most of their lives because they can't afford the spiralling rents, or because their estates are being redeveloped and their homes are being knocked down.

Property prices in Manchester have increased by 50% in the last five years. At the time of making the documentary in 2019 there were 5,000 homeless in Greater Manchester and 95,000 on the waiting list for genuinely affordable housing.

Homeless charities too are being forced out. One charity highlighted, which provides hot breakfasts, a food bank, and somewhere to get a hot shower for the homeless, is forced out of premises near the city centre that it has been in for 30 years because of property development.

The charity workers turn up one morning to find the locks changed so they have to serve the breakfasts out of the back of cars. Eventually the charity finds some premises to work out of, but they are several miles away from the city centre where most of the homeless sleep.

The programme also shows up the abysmal role that Greater Manchester Labour Mayor Andy Burnham is playing in dealing with the city's housing crisis. Rather than launch a campaign to demand more funding from central government for council housing, he is instead relying on charity fundraising events to support housing charities across the city.

One of the drawbacks in the episodes that I watched is that there is no discussion on council-house building. This is not surprising given that Labour councils have no plans to build desperately needed council housing, and are also making the situation even worse by carrying out cuts to council services and jobs with barely a whimper.

The fact that there is not this generalised call for council-house building is probably behind the mixed comments that Anne, a resident living in Collyhurst, makes. On the one hand she is pleased that the area of Ancoats has been redeveloped, but is understandably appalled at the thought of being forced out of her own home to make way for new homes, because the developers are tearing down perfectly good housing.

As Christina says: "What doesn't help, of course, is that social housing for families isn't a priority, and isn't helped by the fact that the 'Right to Buy' scheme didn't lead to new council houses being built. Something has to be done."

This series is well worth watching for showing the massive problems in housing in Britain, but you will have to look to the Socialist if you want to find a strategy to really solve this housing crisis.