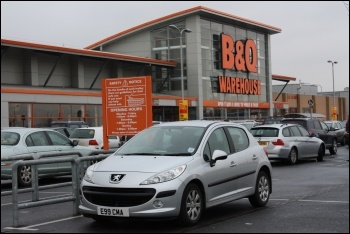 After months of struggling with Covid-19, a worker at B&Q was greeted upon her return to work with a disciplinary, followed by dismissal, for failing to follow absence procedures. Swift action by Socialist Party members in the shop workers' union Usdaw challenged what was clearly a case of unfair dismissal.

'Jane' was challenged for not adhering to absence procedures as it was claimed that she hadn't phoned in before her shifts to inform of her absence. However, as she tried to point out, she phoned on two separate occasions when she did not get an answer. When her condition worsened and she struggled to breathe, no allowance was made for her inability to phone in.

Even with her extreme ill-health, she tried to keep in regular contact with her boss to ensure that the business was kept informed of her condition and her inability to return to work. B&Q then invited 'Jane' to a stage one meeting while still being signed off sick with a doctor's note. This was escalated to a stage two disciplinary when she didn't attend, even though she was too sick to attend.

Initially, 'Jane' wasn't sure how to proceed as B&Q does not even allow an employee the right to appeal a disciplinary decision unless they have been employed for 18 months. This goes completely against the accepted code of practice outlined by conciliation service Acas. However, as an employee can't take a company to an employment tribunal before two years of continuous service, current employment law is stacked completely in the bosses' favour.

'Jane' got in touch with Socialist Party members in Usdaw who helped her draft a letter of appeal. In it she outlined that B&Q had not acted in a fair manner by not giving consideration to the fact that 'Jane' could not call in because of the respiratory nature of coronavirus. She also challenged B&Q for acting unfairly in escalating the issue by holding it against 'Jane' for not attending a meeting while she was still signed off as ill. Despite B&Q's own no-appeals policy, it invited 'Jane' to an appeal meeting, showing that its unfair policy can be overturned when put under pressure.

'Jane' and a Socialist Party member in Usdaw then participated in the appeal meeting, in which they challenged B&Q for not following its own policies. They also disputed going through with a disciplinary action on an employee ill with Covid-19, which exacerbated her condition with unnecessary stress during her illness.

The result of the appeal was that 'Jane' was reinstated with pay backdated to her initial dismissal. This is not only a victory for 'Jane'; it shows that B&Q, indeed any company, can bend the knee when shown an organised resistance. It is a victory like this that shows the vital role that trade unions can play in defending workers' rights, and thus the need for workers to join and organise with a trade union.

As bosses look to cut back on staff, using coronavirus as a cover, the workers' movement must coordinate action and challenge bosses to protect jobs, and ensure that workers do not pay for the coronavirus crisis.