How we built the Socialist Party in Staines 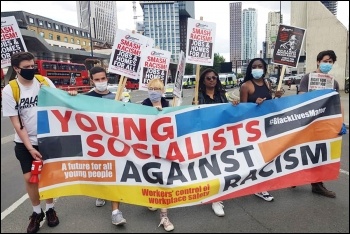 Staines Socialist Party members are seen by many as the 'go to' people on issues like fighting cuts in local services, and campaigns against racism and discrimination, such as Black Lives Matter (BLM). But the branch has struggled to grow beyond a handful of stalwarts for some time.

Our large contact list, who we keep in touch via an email newsletter, increased during Jeremy Corbyn's leadership, as more and more people became interested in socialist ideas. But we remained a very small band of Socialist Party members.

All that changed when Keir Starmer took control of the Labour Party and put it firmly back in the hands of the right wing. We wrote to all the Labour Party members we knew, asking them to consider joining us.

We energetically participated in Black Lives Matter protests, meeting more young people interested in the Socialist Party. We are meeting online via Zoom and attendance is picking up.

I took a few days off work to meet as many of the people who wanted to know more as I could - outside, observing social distancing - and to ask them all to join. I made the appointments and took my laptop, so they could sign up straightaway.

The end result is eight new Socialist Party members and the party branch is revitalised. And there are still a few people left to see!

Some new members are already building the Socialist Party. Lisa has set up a twitter account, @SurreySocialism. Nathan has put together a programme of meetings. And Louis has set up an email account and is running our Facebook page.

Below seven of our new members say why they joined.

A party for the working class

I joined the Socialist Party because it has become more and more clear that there is no longer a party in the UK that truly represents the working class.

"The only antidote is socialism"

I wasn't too interested in politics, until I came of age during the 2010 elections. The last ten years of Tory policies, mainly austerity, have had a very real impact on my life, and many others.

When Jeremy Corbyn became Labour leader, I felt we finally had an MP representing the people rather than themselves. This inspired me to join the Labour Party and become more active elsewhere - I became the workplace union rep at my job.

When Corbyn stepped down and Starmer brought the Labour Party more to the centre, the party didn't align with my views anymore and I left. This made me politically homeless.

I believe in socialism and socialist values. I want to be part of something that offers that.

After a quick Google, I stumbled upon the Socialist Party and sent an enquiry through. My union branch secretary, Paul Couchman, replied.

We had an informal chat over Zoom and I joined a week later. It feels good to connect with people who have like-minded views.

The Socialist Party campaigns against austerity, job losses, privatisation and pollution - all exacerbated by the current government and their approach to the pandemic. Covid-19 has exposed the inequality in society.

It has never been more important to embrace socialism and come together as the working class to stand up for our rights, and fight for those who cannot fight for themselves.

Seeing Generation Z rise up and fight - against school shootings in USA, for Black Lives Matter, and school strikes for climate - has been a refreshing change to the apathetic attitude towards politics that I'm accustomed to.

Capitalism is poison - exploiting people through cheap labour reinforces the class divide. It thrives on inequality and suppression of the working class.

The only antidote is socialism. We must demand a better way of life, not only for people, but for the planet as well, because if nothing changes, nothing changes.

My parents suffer NHS cuts and lack of PPE

I joined the Socialist Party when it had a large presence at a Black Lives Matter protest in London. It recognised how racism and capitalism reinforce each other.

My parents, who both work for the NHS, were suffering from continuous Tory cuts and the government's terrible handling of the pandemic - unable to provide sufficient protective equipment. I care greatly about the climate crisis and believe it is vital for the world to take a socialist turn.

"These are people I can work with"

I've always been a socialist, even before I knew that there was such a thing. For the first forty years of my life, I never felt the need to do more than live my life by the principles that I believed in.

Austerity made me realise that I needed to do more than that, and for the past six or seven years I've been searching for the right party for me.

I've been following the Socialist Party with interest for a while, and was invited to an online meeting. Despite this strange, detached way of holding meetings, the Socialist Party had warmth and humanity that I'd rarely experienced in other face-to-face political meetings.

It wasn't stuffy and outdated, which I admit I had been expecting. The final push towards joining was having the opportunity to meet existing members and thinking: "Yeah, these are people I can work with".

These issues are impossible to ignore

After attending the Socialism 2019 event in London, I wanted to know more. I enjoyed the seminars and discussions about different situations across the world, and being with people who were committed and energised for change for the better.

The ever-increasing wealth gap and the unfair treatment of workers on zero-hour contracts have become impossible to ignore. Workers are being railroaded into accepting redundancies, by companies with no consideration for the workers and the community.

I have always been a socialist, and now I am happy to be a member of the party. I joined the Socialist Party to be part of an organisation where those involved openly share their ideas, and believe that we can live and work in a better way for everyone.

Jill and Darren Lacey, and their 14 year old daughter Sam, 14

Joining the Socialist Party was a natural next step for me. I have always held socialist values, although I never realised it was called socialism.

When Jeremy Corbyn came along, I realised so many others felt the same as me, and they were prepared to speak out and act on it. Our children, communities and our planet deserve a more caring and supportive society and future.

Growing up in Nottingham, in a working-class environment, I was aware a conservative establishment was taking all the power, while the average hard-working person was just lining the pockets of the government and status quo.

My first inclination to socialist thinking was reading H G Wells as a small boy. I was a Labour Party member, because it seemed to be the only logical rebuttal to the Tory government, until the coup against Jeremy Corbyn and the Toryfication of the party.

Knowing what the problems can be should empower us to find a new way to change the world. This is why I am and always have been a socialist at heart.

Staines Socialist Party: How can the Tories be defeated?

Staines Socialist Party: What kind of party do we need to fight for socialism?