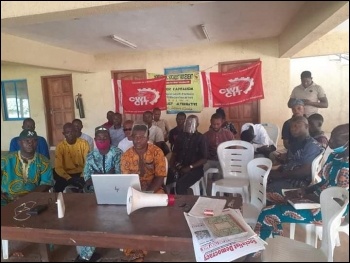 CWI members in Nigeria watch the rally   (Click to enlarge)

Over 6,000 people have watched our rally - Leon Trotsky: Why couldn't his idea be killed? - commemorating the 80th anniversary of his assassination. It was organised by the Committee for a Workers' International (CWI), the international socialist organisation the Socialist Party is part of.

On 23 August, some watched on their own, some in pairs and others hosted watch parties. Here you can see socialists in Nigeria gathered together to watch the rally. It was truly an international event, and the speakers illuminated Trotsky's ideas.

You can rewatch it at 'Socialist World - CWI' on Facebook or 'CWI Media' on Youtube. The contribution by Socialist Party political secretary Peter Taaffe, 'the role of Trotskyism', suffered the most technical issues. But you can now see it in full on the CWI's Youtube channel.