From The Socialist newspaper, 1 September 2020 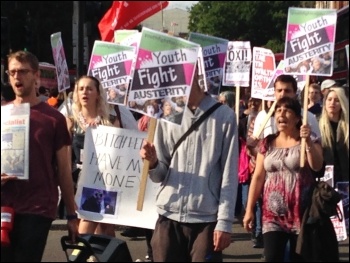 Young people are being asked to pay a Covid penalty on our futures. And the steepest collapse in income.

We're more likely to be concentrated in the service sector, hit incredibly hard by lockdown. A pitiful number of apprenticeships - 1,850 in May - are available. Not to mention the crisis in further and higher education.

Youth unemployment is expected to skyrocket to over one million by the end of this year. That's why Young Socialists and Youth Fight for Jobs will be out once again, up and down the country, on Saturday 12 September, ahead of the Trade Union Congress (TUC) on 14-15 September, campaigning for trade union action to fight for our futures.

We'll be collecting signatures to an open letter demanding that the TUC calls a 'council of war' - to discuss how unions can launch a campaign to defend jobs, fight for mass government investment in socially useful jobs and guarantee real training and apprenticeships for the skills young people need.

We'll also be writing to trade union councils, that coordinate local unions, and individual branches themselves, asking for their support. They should come out campaigning with us on September 12. We're hoping to meet union youth officers too to discuss the campaign.