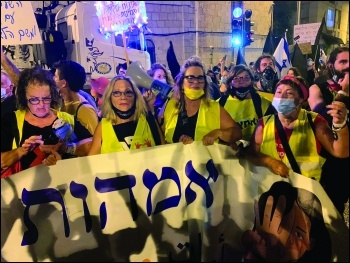 Every weekend evening thousands of Israelis have demonstrated to oust the prime minister, photo UZI D   (Click to enlarge)

Every weekend evening, in Israel's biggest protest movement since 2011, angry protesters have besieged the official residence of Israeli Prime Minister Benjamin Netanyahu demanding his resignation. The loudest chants are "Big business and government are mafia!"

On 31 July, over 30,000 demonstrated around Netanyahu's residence. Small groups of demonstrators held banners from 200 bridges across the country, waving Israeli flags alongside black flags. Other demonstrations have taken place in Tel Aviv and Netanya, where Netanyahu has his second luxury home.

On 21 August, in Jerusalem, 5,000 protesters demanded Netanyahu resign, and over 10,000 the next night, when police made unprovoked attacks and 30 arrests.

Netanyahu faces trial over three separate corruption charges concerning his dealings with Israeli and foreign billionaires. Weekly demonstrations have been held for years in the town of Petach Tikveh, opposite the home of the Attorney General (who is responsible for the conduct of the investigation of Netanyahu's crimes) demanding the prosecution of Netanyahu and his resignation.

Employers' organisations started funnelling money into the protest movement in an attempt to depoliticise it and channel it to their interests. They built stages with expensive PA systems, on which small businessmen made speeches demanding increased government aid to save their firms from bankruptcy. When this infuriated the demonstrators, they brought striking social workers onto their stages.

These demonstrations were led by a retired general and composed of middle-class, pro-establishment older people who despaired at the damage being done to the Israeli government by the right-wing populist Netanyahu regime.

But the ranks of these protests have been massively swollen over recent months by young people, many of whom have lost their jobs due to the coronavirus epidemic.

Unemployment has risen to 20%. And many young people are officially self-employed victims of the gig economy. This group has been given no financial support to survive the crisis.

They have been infuriated by Netanyahu's lavish expenditure - constructing the largest cabinet in Israeli history, with 36 ministers - all with their own drivers and bodyguards - while the coronavirus crisis throws hundreds of thousands of Israelis into destitution. This younger group now dominates the demonstrations, which have become much more assertive, marching around the prime minister's residence and blocking key road junctions.

The initial response of Netanyahu, who denounced the demonstrators as leftists and anarchists, and sent police to attack them with water cannon, backfired. It provoked an increase in the defiance, the anger and the size of the demonstrations.

Faced with increasing opposition, Netanyahu tried to rebuild his social base by ordering stimulus payments of NIS750 ($220) to be made to every adult. This attempt to buy off popular opposition did not go down well. One million Israelis are now unemployed and two million are living in abject poverty.

This has also given him the opportunity to jettison his commitment to annex parts of the West Bank - a commitment made during the last general election to pander to the hard-right ultra-nationalists, but which he had no intention of implementing, as the status quo is far more advantageous to Israeli capitalism.

While this took the news headlines away from the protests, it has not impressed the demonstrators. So Netanyahu attempted to escalate the conflict in Gaza.

Realising that repression of demonstrators has been counter-productive, the police have ended the policy of wholesale attacks on demonstrators, attempting to let the demonstrations run their course.

These demonstrations have had a carnival-like atmosphere, with the only clear demand being Netanyahu's resignation. But the demand for "anyone but Netanyahu" does not provide a way forward for the movement.

The Blue and White Alliance was set up last year with a programme of "anyone but Netanyahu". It won 25% of the votes in the March 2020 elections and then proceeded to go into coalition with Netanyahu! The coalition faced collapse in August over failing to agree a financial budget, but a new election was avoided by extending budget negotiations for 100 days.

Netanyahu's right-populist government is not the cause of the crisis of Israeli society, but a symptom of it. This crisis of Israeli capitalism cannot be solved by a change of personnel at the top. It is the capitalist system which needs to be replaced.

Last month, the nurses went on strike for one day and won their main demand for an increase of 2,000 in their staffing levels. A 16-day strike uniting both Jewish and Arab social workers won NIS200 million worth of pay increases, and increased protection of social workers from attack, after the leader of the Histraduth trade union threatened to bring other public sector workers out on strike. This shows the power of workers and the weakness of the government during this crisis.

The independent union, Workers Power, announced in mid-August a general strike of all its members, starting on 1 September, against the mass sacking of 1,300 teachers who teach young people who have dropped out of the mainstream education system. This group of teachers are members of Workers Power, and not of the Histraduth which organises 250,000 teachers.

Unfortunately, neither the Histraduth nor Workers Power have taken part in the recent demonstrations. The leader of Workers Power said that this was because of the demonstrators' failure to raise the class questions. But workers' organisations intervening in such protests can highlight the class issues at the root of such struggles.

The workers' movement needs to link up with the anti-Netanyahu protest movement and put its stamp on events. The movement needs to demand not just the removal of Netanyahu but the entire rotten capitalist establishment, and an end to its policy of making the working class pay for the Covid crisis.

Bringing down Netanyahu will change nothing if he is replaced by one of the other rotten pro-capitalist politicians. A workers' government with a socialist programme is needed, and this makes the construction of a workers' party an urgent necessity.

Israeli society is in crisis and is facing the biggest wave of protests since the social movement of 2011. But this movement needs to arm itself with the lessons of the experiences of that movement, the Arab Spring, and the 1987 Intifada.

The spontaneity of the movement in itself is insufficient. It needs to forge a democratic leadership, fused with the developing workers' movement, and needs a clear political programme, aimed at not only bringing down Netanyahu, but also the crisis-ridden capitalist system he represents.