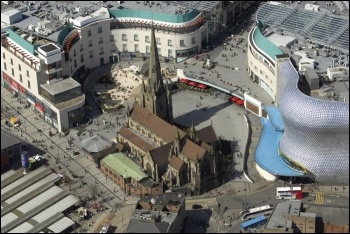 1.6 million people in Birmingham, Solihull and the Black Country were banned on 16 September from visiting or hosting people indoors or in private gardens unless they are already in a support bubble.

All of the most affected places have large amounts of overcrowded housing where social distancing is impossible. They also have large numbers of precarious workers who worked throughout the pandemic because they are too scared to speak out against unhealthy working conditions and poverty. Birmingham has some of the most deprived neighbourhoods in the country.

Tory West Midlands mayor Andy Street says that workplaces and commercial premises that are allowed to remain open have been prepared in a Covid-safe way and have been examined for safe return. Yet Birmingham Council has just announced that a restaurant has had enforcement action taken against it for not having a reliable and trustworthy test-and-trace system.

The Tories are trying to regain lost political support because of their disastrous handling of the pandemic by transferring the blame to young people and fostering division between generations.

Young people won't accept this blame lightly. Many can see the contradictions in being allowed to see your friends in the pub but not in their house, or the assumption that all workplaces and commercial premises are Covid-safe but their houses aren't.

The difficulties in enforcing the restrictions, and impossibility of verifying membership of a support bubble, make a high degree of non-compliance likely. So does the fact that the politicians making these decisions are the same people who treat working-class people with contempt by cutting public services rather than standing up to the Tories.

We shouldn't just hope that this will hole the Tories below the water line, but should energetically campaign for the pandemic response to be democratically controlled by local authorities and the NHS, for workers to have the final say on when a workplace is safe, and for genuine community control on any restrictions of movement.