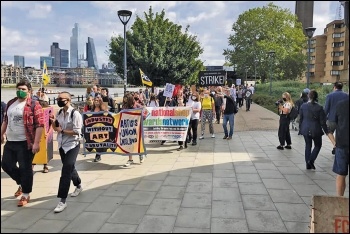 PCS union members at the Tate and Southbank march against redundancies, 12.9.20, photo by NSSN   (Click to enlarge)

Workers on indefinite strike at the Tate gallery in London marched alongside other arts and culture workers on 12 September against job losses in the sector. Tate workers are facing 313 redundancies as management blames falling customer numbers because of Covid-19. The growing lines of visitors after Tate reopened shows how short-sighted this is. Send messages of support to [email protected]