Working-class mass action to defend our lives and livelihoods

To the surprise of absolutely no one, given the disastrous Tory record so far, we face a new Covid peak this autumn. Some scientists say Britain could be on course for 50,000 new cases a day by mid-November, resulting in 200 daily deaths.

This would put Britain among the worst countries in the world for virus spread - alongside India, the US and Brazil.

'Look over there'. That's the summary of Boris Johnson's response. Sound and fury to distract from the multiple forced U-turns - and little else. His much-trailed speech and amendments to the Covid laws solve none of the threats to our lives and livelihoods.

With no effective opposition (Keir Starmer has committed to backing whatever measures Johnson puts forward, and to reinforce his messages) we are encouraged to blame each other for the crisis made in Downing Street and in the boardrooms of big business.

So those who are concerned about their health are encouraged to blame those who have returned to work and education. Those who fear for their jobs are invited to direct their anger at those who campaign for safety and against a reckless reopening of society.

Yet the weak Tories cannot even agree about what measures to take.

Initially Johnson had intended to take no measures to deal with the coronavirus, but was forced to out of fear of mass anger if the NHS became overwhelmed. Now the brakes have been pulled on the return to the workplace that he was pushing just a few days ago!

The Tories' constant zig-zaggery derives from being buffeted between their attempts to prioritise the 'economy', ie the bosses' interests, and the threat of mass opposition to their disastrous measures.

Student anger forced a U-turn on A-levels. This indicates what mass, organised pressure on the weak and divided Tories could achieve.

It is certainly not impossible to protect both health and jobs. But not if the interests of the boss class are prioritised. 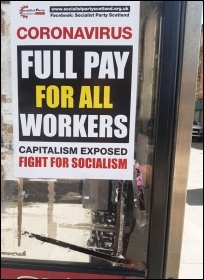 We need a programme based on protecting health and defending jobs: demanding work or full pay: fighting for workers' control of workplace safety; fighting the privatisation of the NHS and public services that the Tories are pushing under cover of Covid; and campaigning instead for investment and expansion of publicly run and democratically controlled test-and-trace services.

This is the start of what is necessary to defend our lives and livelihoods, and to unite working-class people in action in the face of Johnson's divisive efforts.

The Socialist Party is fighting for such a programme in the trade unions which, with their 6.5 million members, have enormous potential strength to force much greater retreats from the Tories.

In the National Education Union, Socialist Party members are fighting for safe schools; track-and -trace; immediate testing where there are outbreaks; maximum class sizes of 15 where the infection rate is above 20 new cases per 100,000; extra resources for 'blended learning'; allowing vulnerable staff to work from home; and an escalation of industrial action if necessary to achieve a safe workplace.

In the RMT transport union, Socialist Party members have been to the fore in fighting for the union to oppose redundancies and attacks on pay. Why should the working class pay for a crisis not of our making?

We link this demand with the need to fight for an independent working-class political voice and for a socialist alternative to the cuts and chaos of capitalism.

The end of rail franchises is a tacit acknowledgement that the market system doesn't work. However, mass organisation and action by the working class is necessary to fight for the alternative - nationalisation under democratic working-class control and management as a step towards a socialist plan for the economy.

Capitalism and its defenders cannot keep us safe or offer us a future. We have to organise to fight for that.

Join us in the fight for: