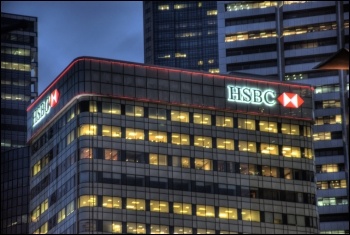 The intimate connections between organised crime, high finance and the capitalist state have been exposed. Documents leaked from the US Financial Crimes Enforcement Network (FinCEN) detail over $2 trillion of suspect transactions over two decades.

The so-called 'FinCEN Files' number tens of thousands of pages across 2,657 documents, including 2,100 'suspicious activity reports'. Even this handful of 1999-2017 files is a tiny fraction of the data held by the US Treasury's money laundering and fraud watchdog.

These revelations follow damning exposés on super-rich tax dodging in recent years. The Panama Papers in 2016 and Paradise Papers in 2017 showed that even the feeble laws regulating big profits are optional for fat cats.

As to the FinCEN Files, former FBI agent Michael German told BuzzFeed that "the largest money laundering operations occur with the cooperation of the financial institutions, or at least some officers within those institutions. The lack of money laundering enforcement had nothing to do with a lack of evidence of suspicious transactions, but a lack of interest by political and law enforcement leadership."

US bank JP Morgan, for example, moved over $1 billion in five years for a firm suspected of representing Semion Mogilevich. That's the ruthless international mobster who moves in the highest circles of the Russian state.

But the worst offender seems to be British capitalism, according to samples highlighted by the International Consortium of Investigative Journalists. Such is the legacy of Thatcher's 'Big Bang' deregulation of the City of London.

In the US, still the economic centre of the universe, 2,209 suspect transactions totalled $3 billion. But in the UK it was almost double: $5.9 billion in or out across 1,680 transactions. And the British Virgin Islands, a notorious tax haven, received $107 billion in just 21 payments!

British bank HSBC is at the centre of a particular scandal. It served a fraudulent company called 'WCM777' that thieved at least $80 million, mostly from small migrant investors in the US. Rather than investing productively to generate profit, each round of investors was paid by the investments of the next: an illegal 'Ponzi scheme'.

With three US states already moving to close it down, HSBC let the scheme transfer over $15 million. The firm's owner scooped up Sierra Leonean mining rights, a mansion, and two golf courses.

HSBC has learnt nothing from its earlier bust in 2012. Alongside fellow British bank Standard Chartered - which the FinCEN Files show handling alleged Taliban money - it had laundered hundreds of millions for Mexican drug lords. The United States was pressing criminal charges.

George Osborne was the Tory chancellor of the exchequer at the time. Osborne (whose own family business appeared in the Panama Papers) wrote to US officials. He had "concerns" over "unintended consequences" and "contagion." To avoid wider damage to the profit system, the threat of jail became a fine.

Top bankers should do time for criminal activities. So why is there "a lack of interest by political and law enforcement leadership"?

Robert Mazur, another former federal agent, explains: "Even if it's bad wealth, it buys buildings. It puts money into bank accounts. It enriches the nation." By 'the nation' he means only 'the capitalists', as the Panama Papers and cost-of-living crisis attest.

Banks even claim not to know who some of these clients are! HSBC staff in the US reportedly asked the Hong Kong branch for the name behind a suspect firm. 'Trade Leader' had made over half a billion dollars of transactions. According to the FinCEN files, Hong Kong replied: "None available."

By contrast, just think about the somersaults which workers and small businesses have to perform to access financial services. There can be no doubt such ignorance is studied and derives from profit interests.

Banks control the bulk of economic activity. They are owned by the billionaires and 'regulated' by their overpaid friends. Mass anger and the needs of the market can lead to secondary restrictions. Beyond that, you might as well ask the Moon to regulate the orbit of the Earth.

Where there's profit to be had, the bosses will find a way to have it. Not just 'legitimate business', but organised crime. And not just official crime, but the social crimes of ruinous lending practices, home foreclosures, and extorting public bailouts after gambling away the economy.

Ending these crimes requires breaking the power of their beneficiaries. Nationalise the banks and finance sector, under the elected control of ordinary bank workers, users and the wider working class.

With the profit motive removed, financial secrecy and crime could be stopped at source. And the colossal resources and organising power of the banks, directors of the economy, could be planned democratically. They could create jobs, homes and services, not bosses' treasure troves.