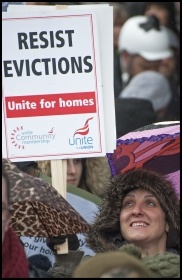 The six-month eviction ban has come to an end. Hundreds of thousands of people could now be threatened with eviction. The Social Housing Action Campaign (Shac) participated in a protest in London on 16 September to demand the ban be extended. Shac chair and Socialist Party member Niall Mulholland spoke at the protest.

I live in a housing co-op. The housing co-ops, so far, have resisted evictions because of tenants' loss of income due to lockdown. We've no intention of making people homeless because they've been furloughed.

With furlough and huge cuts in wages, rent arrears are inevitable. I don't like the phrase 'rent forgiveness'. It's not 'forgiveness'; its people's right to live in a home, in a secure situation with affordable rent.

The eviction ban should continue and evictions should be waived. The result of lifting the ban? Mass evictions will take place.

The only way to resolve this situation is a mass programme of council house building. Jeremy Corbyn, when Labour leader, put forward building 100,000 council homes a year.

A 59-year-old woman from Yorkshire was forced to live in a van for the last year. This crisis is going to get worse. We're talking about hundreds of thousands or millions of council homes that are needed.

It's not utopian. Even Tory governments did that in the 1950s. It can be done again. It's a question of will.

Even under the eviction ban, there have been almost 1,000 illegal evictions in London over the past 15 months, reports Safer Renting. The end of the ban could fire the starting gun on further waves of illegal evictions, as well as processes that can end in legal evictions.