Editorial of the Socialist issue 1103

For democratic working-class control of health and safety 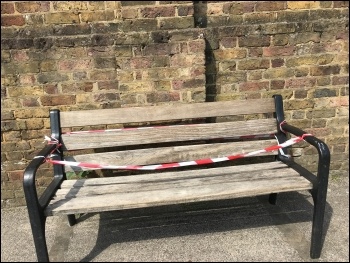 While government ministers warn of an exponential rise of the coronavirus, the same magnitude of rise could be applied to the level of anger against them over their handling of the pandemic.

An overwhelming majority of people have shown willingness to accept restrictions, tests, etc, to help reduce the spread of Covid. However, restrictions can become increasingly tiresome, especially after hope of them ending. But much more intolerable is the Johnson government's abysmal failure on every aspect of countering the pandemic.

Track and trace, testing, local 'lockdowns', schools and universities restarting, lack of financial support for people isolating - all have further exposed the chaos and ineptitude at the top. They have also exposed the government's central motive of trying to safeguard big business and profit-making, rather than prioritising people's health.

Even so, not only has the UK been one of the worst-hit countries health-wise, it has also had one of the greatest economic declines.

People rightly ridicule the argument that the coronavirus spread is being driven by social mixing, and not in schools, workplaces or on public transport. Confidence in the government's actions is evaporating as fast as its zigzags take place: there was a gap of only a few weeks between workers being urged to return to their workplaces and then told not to, and between the 'eat out to help out' scheme and the 10pm curfew.

The exposure in May of Johnson's advisor Dominic Cummings' self-exemption from Covid restrictions has been followed by other naked class or status-based exemptions, such as for grouse shooting. Parliament's bars were initially not subjected to the 10pm curfew until a public outcry forced a reversal.

Meanwhile, students are presently at the sharp end, with many facing prison-like conditions and still expected to pay financially for their nightmare experience. Also, while largely confined to online teaching due to the lack of provision of safe face-to-face conditions, they are not discouraged from doing their jobs in the food and retail industry, unless they've had isolation imposed. 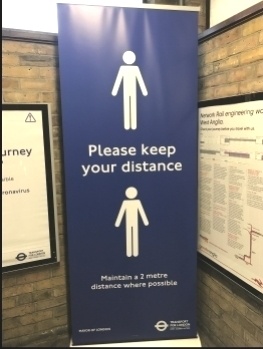 A safety warning at a London station, May 2020   (Click to enlarge)

The Tory party's members, MPs and donors realise that outrage is developing and are lashing out at Johnson. The Guardian's political editor commented: 'The scale of discontent in the Tory party is extraordinary for a government with a thumping majority, so early in its term, and in the teeth of a national crisisť.

But they are widely divided over what to advocate, with some wanting tighter anti-Covid measures and others cheering chancellor Sunak's message that 'lives can no longer be put on holdť. Sunak received the highest rating in a poll of Tory party members, showing which wing most of them are falling behind.

At the same time, a number of Tory MPs from different viewpoints have been rebelling against 'government exercising draconian powers, without parliamentary scrutiny in advanceť, as Tory MP Steve Baker put it, laying barer the domineering nature of the Johnson leadership - a small cabal dishing out diktats.

Many of them are also uneasy about the newly introduced draconian penalties, increased state powers and encouragement by health minister Matt Hancock of a culture of snooping. This, though, is from a libertarian point of view, not from that of the workers' movement, which must assess all the rules from a working-class standpoint and fight against all unacceptable measures.

The movement also has to warn against powers being held in reserve by the government for use against protesters and workers' struggles.

No trust can be placed in any of the democracy-feigning Tory MPs, or other pro-capitalist parliamentary politicians, to make decisions in the interests of ordinary people.

As the Socialist has argued throughout the pandemic, trade unions and working people need to fight for the right to be able to check, assess and control all special measures - at workplace, campus, community, regional and national level. This is the only way to make sure that restrictions and other steps are only used to safeguard the health and other interests of working-class and middle-class people.

The majority in society could only have confidence in restrictions decided on by their own democratically controlled representatives - the only people who could be trusted to put people's interests before profit.

Every organisation involved in implementing Covid-related measures should be publicly owned and democratically controlled. However, beyond that, building support for a full socialist programme - and a mass workers' party to implement it - is necessary to protect and develop the living standards of all.

It is also the case that only a socialist society, with public ownership of the major companies that effectively control the economy, would be able to resource and take effective preventative measures against future pandemics.

It would then be possible to take early enough action to stop a pandemic like this one from gaining hold and spreading.