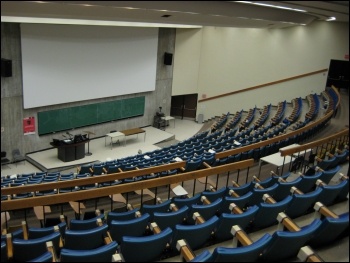 Going to university right now feels like walking into a trap made of fire, surrounded by circling sharks, as alarms blare off in every direction.

Watching the news and seeing the blame go to students for the rise in cases just goes to show how afraid the capitalist class is of young people today. They want to scapegoat us, as we have shown that when we are angry, we fight back - and right now we have every reason to be angry!

Most students are frustrated that our uni experience has been narrowed down to an eye-wateringly expensive online course while the whole uni has become a ghost town. The pressure is 'well, you're here now' - and you'll be unable to get your money back if you go back to your parents anyway.

Students are only allowed to socialise within our household 'bubble', and not mix with other households. While meeting the flatmates, there is a silent anxiety about cabin fever come another lockdown. Walking past the hundreds of pointless student union banners promising two-for-one cocktails at this night, or 10% off at that pizza company, is just a reminder.

This trap was laid by the university vice-chancellors, and their friends who own major businesses and student accommodation, so that they can stay afloat. The marketisation of unis has led to higher education becoming yet another thread in the capitalist spider-web.

But a spider-web is only strong when every part is intact. If one thread breaks, the rest can start to fail too. It really shows how precarious the capitalist system is.

The Tories have thrown students into unsafe environments, with almost no access to facilities, then pointed the blame at us for infection rates, with only debt, unemployment or lifelong servitude for us to look forward to. All for a buffering screen on Zoom.

It was obvious from the start that we wouldn't be able to access any teaching in the campuses. But they still made all the students move to Swansea and pay for accommodation.

They said, 'we have in-person seminars'. Then it turned into 'in-person study groups'. Now, with local lockdown in Swansea, that's almost definitely not going to happen either. Everything's online and could have been done from home.

The local lockdown in Wales began - suspiciously - in every area in South Wales, excluding Swansea and Cardiff, where the two main universities are. The day after the final load of students moved in, we went into local lockdown, so we couldn't leave.

I think you can make a pretty good inference. Students are a big part of the economy in Swansea and Cardiff. When you walk round either city you're surrounded by students.

So they wanted to get all the students in, and then trap us here. One boy in my halls got quite lucky; he dropped out the day before local lockdown.

But everything we're doing now we could have been doing from home. Literally everything's online. I've been to campus once, and that was just to look around. I haven't been to any learning. I'm not even sure if we're allowed to go there now.

There's two campuses at this uni, and one's in a different lockdown area to the other. So two-thirds of the halls can't go to that campus at all, but half the people in those halls have to go to that campus to do any learning. It's just an absolute mess.

Mostly people are annoyed about freshers, because it's all gone away; it wasn't a proper freshers. Security are cracking down in the halls, going after people that are organising gatherings.

We're in massive Covid 'bubbles'. Anyone that's in your block is in your Covid bubble. So there's, like, 70 people in my block, and we're all in one massive household. We can go anywhere together, but can't mingle with anyone else - literally even across the street that we share all the same facilities with.

My halls doesn't have any confirmed cases, but that could change very quickly. When that happens, we could end up the same as Glasgow and Manchester Met, all having to stay inside. And at that point, you might see rent strikes.

No plan, no transparency, no safety

The government and university bosses have had all summer to develop a plan for a return to campus. It was entirely predictable that there would be an outbreak. The approach has been completely haphazard.

Throughout the summer, university facilities have been closed, and so PhD students like me have been unable to access resources for our research projects. Students simply can't understand why we have not been given access to the library. University bosses have not bothered to develop safe ways for us to get access.

This year I had planned to apply to be a postgraduate teaching assistant, but they have completely scrapped the positions. The modules for undergraduates have been restricted to reduce expenditure on staff. Management is so desperate to cut costs that students are wondering how long will we will be able to have access to resources.

We are worried about safety. I know people who are avoiding moving into their student residences as they feel like at any moment there will be a lockdown. We have seen events in Scotland, where it's as if students are imprisoned in their halls.

Universities should not be pursuing a return to campus at any cost, and without a plan. Bosses need to be more transparent about their decision-making, and clearer in their communications.

Students are not allowed to go out to pubs or to meet our friends; all we can do is to sit in our rooms and brood. Socialist Students has been holding socially distanced street meetings and is starting to campaign.

Cardiff and Swansea went into lockdown the day before term starts. People don't know what is going on, what they are and are not allowed to do. Communication from the university has been poor.

Part of our campus is within the local lockdown area and part of it is outside. I can only feel for those first-year students who find themselves in this situation, and in an unfamiliar city.

Lots of this year's new students have gone through education under Michael Gove's 'reforms', have taken part in the A-level protests, have ended up at their third or fourth choice university through clearing - and now this.

The university bosses wanted to open up university because they see students as commodities and want our money. We need free education and an end to marketisation. I can see a mass youth movement developing - we have been holding Socialist Students campaign stalls to build for this.

Lots of students have entirely online teaching. Many of my friends live in shared housing with a poor Wi-Fi connection, unable to have a decent-quality stream, with everyone in different online lectures at once. There is a joke going round that the £9,000 spent on fees could have been better spent on subscriptions to streaming services.

University bosses and the government want us to attend because they want our money and our rent. Students are being told they need to arrive in the city by a certain date or else they will be kicked off their course.

We are not getting £9,250 a year of teaching, and people are making the case for partial or full refunds. Ultimately what we need is free education and a properly funded university system.

Staff member speaks out: we warned this would happen

The outbreaks starting to take hold on university campuses and the dreadful position students have now been forced into has been firmly on the minds of all those who work in universities since the summer.

We followed the stats in the US when their campuses reopened. We looked at the latest evidence about the spread of coronavirus in small spaces. We thought about all those who commute onto campus each day, how students work part-time jobs in the community, and how impossible it would be to contain any outbreak.

The employers and government ignored all of our concerns. They even laughed at us at times. They told us that we don't care about students or their mental health. That we were being difficult.

Now what we had argued would happen is being realised, there is no joy in being right. Rather, it is hugely demoralising for it to have ended up like this. It is a defeat that we have not been able to establish genuinely safe campuses.

But, it is important to remember that it was not inevitable. The government and bosses must take the blame and be held responsible for their actions. So many measures could have been taken to avoid this.

Even now, we should not just accept that all students will get Covid-19 and be isolated all year away from loved ones. In the face of overwhelming evidence that campuses are not Covid-secure, students have still been arriving.