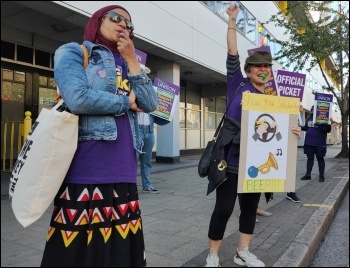 "We need a call to arms. That's why I call on everyone to write to the press and lobby their MPs". This was the 'clarion call' of Trades Union Congress general secretary Frances O'Grady at the recent online TUC congress to force the Tories to extend the job retention furlough scheme beyond its planned end at the end of October.

This was before Boris Johnson was forced to bring in new contradictory lockdown measures as infections rise ahead of winter. This second wave takes place when workers are already reeling from the threat to their lives and livelihoods as redundancies start to mount.

Congress should have been a council of war to put the whole trade union movement on a war footing behind the clear message that workers will not pay for this crisis. There can't be a rerun of the first wave, when many union leaders capitulated to the 'national unity' mood that was cranked up by the Tory government and their media, the bosses, and Labour leader Sir Keir Starmer.

But the signs aren't good. Instead of a call to arms, a week later O'Grady was virtually arm in arm with Tory chancellor Sunak and the head of bosses' union the CBI when the Job Support Scheme was announced.

'All in this together'?

Ask the British Airways workers if 'we are all in this together'. Management sacked 12,000 of them and used brutal 'fire and rehire' methods against the rest to impose attacks on their contracts. This now appears to be the Covid weapon of choice for the employers, with it being rolled out for British Gas, to Go Ahead buses, as well as, scandalously, Labour Tower Hamlets council, forcing Unison members to strike. This offensive is increasingly being spearheaded by the victimisation of union reps and members.

Back in March and April, as the pandemic struck, union leaderships stood down disputes. This inability to stand up against 'national unity', and the stark reality of unsafe workplaces and economic crisis, is the root cause of a whole series of crises that have broken out in what seems to be union after union in the last few months.

On the surface, these internal struggles, splits and divisions appear to be mere personal antagonisms. But they are caused by the union leaders being mired in pessimism - that it's not possible for workers to fight given the economic carnage.

The defeat of Corbynism has seemingly shut off the political front for them, although many, including from the left, have adopted the 'lesser evilism' of giving uncritical support to Keir Starmer, despite him shifting Labour to the right.

But it's not impossible to fight. Actually, while the union leaders' initial reaction was to lay down their arms in the 'national interest', there have been firstly a whole number of unofficial actions as workers fought to make their workplaces safe, and then official strikes to resist the attack on jobs and pay, terms and conditions.

It was the threat of a strike ballot in British Airways by over a thousand Unite members in a socially distanced mass meeting that forced management to return to the negotiating table. PCS members, out indefinitely at the Tate galleries in London have taken over 40 days of strike action, while Unison rehab workers in the north west of England and GMB members in Brighton are both striking for ten days further action in their respective disputes.

It is vital that this action be backed by the demand that companies should be taken into public ownership to save workers' jobs.

There is a totally different mood now to when the pandemic first struck. The incompetence and hypocrisy of the Tories, summed up by Cummings breaking lockdown restrictions without any comeback, has stripped bare the class inequalities in society and built a furious mood.

This was the basis for the mass Black Lives Matter movement, and the NHS pay protests, which were organised by rank-and-file health and care workers because of the absence of the union leaders. However, the pressure of this has forced the NHS unions to table pay claims up to the 15% demanded on the marches. The new lockdown is only going to fuel this mood.

In addition, the student A-levels rebellion forced the Tories to U-turn in a mounting number of retreats. The National Shop Stewards Network called on the TUC and the unions to organise a day of protest on Saturday 24 October to demand that the government continues the job retention scheme but on the basis of 'work or full pay'.

If properly organised and built for, raising the need for co-ordinated industrial action, a trade union protest could still lever huge pressure on the Tories to fully retreat. They may have had to bend because of the new restrictions and economic threats, but this is the opportunity for the union movement to put its stamp on events, and give confidence to workers that it's possible to fight and win.

This is crucial to cut across the division and conspiracy theories of the populist right politicians, uniting workers against the real class enemy, the Tories and the bosses.

Oppose bans on vigils - Defend the right to protest