During the Covid-19 pandemic, members of Usdaw, the shop and distribution workers' union, have been hit hard. The non-food retail sector was particularly affected by the recession that was developing prior to Covid and which has now been accelerated by it.

Substantial numbers of Usdaw branches have not been meeting at all during the pandemic - despite the availability of Zoom. During lockdown, no guidance has been produced from General Secretary Paddy Lillis to assist branch secretaries to effectively resume branch meetings.

This was opposed by the Usdaw Broad Left. We want to elect a fighting union leadership that will stand up to the bosses in the industry and the government, and that will mobilise members to defend workers' safety, jobs and conditions. But to proceed with elections as things stand would lead to a democratic deficit with only part of the union being able to take part fully in the nomination process.

We therefore support the decision by Usdaw's executive council to overturn the recommendations of Paddy Lillis and postpone the elections by a year.

Concerns have been raised that with elections suspended, Usdaw's Annual Delegate Meeting (ADM) will not be able to go ahead. However, the timetable for ADM would not usually be set at this time, and the only elections which would affect it, those for the standing orders committee which oversees ADM, while usually held alongside the others, are not subject to the same rules as the delayed elections.

Given the changed situation in retail over the last year, particularly during the Covid-19 pandemic, plans should be put in place by the executive committee for the ADM to go ahead in as 'normal' a fashion as possible, ideally in person as usual, including holding it slightly later in the year if this facilitates it.

Under Lillis' watch, even executive council members of the union are being victimised by companies - such is the case with executive council member for Scotland and Glasgow Ikea rep Richie Venton (see below), who Lillis has so far failed to even publicly support. So what hope is there for other reps feeling confident the union's officials have their back?

Fully restarting the union's democratic structures is not just an organisational task, but also a political one. This starts with putting forward a strategy for reps and activists to defend the interests of Usdaw members, whether in retail, distribution or any other sector the union organises in, and throwing the full weight of the union behind any member that companies attempt to victimise for doing just that. 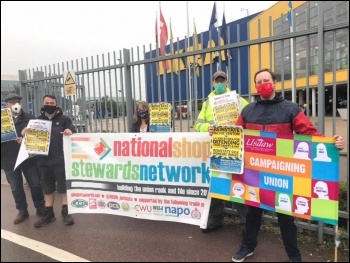 Security at Ikea manhandled and shoved peaceful protesters, including Socialist Party members and the Blacklist Support Group, out of Ikea's Tottenham store on 24 September. They were demanding the reinstatement of sacked Usdaw shop steward Richie Venton.