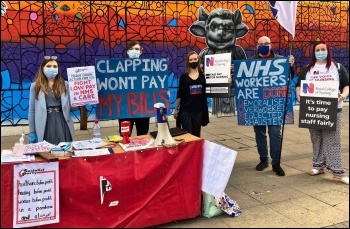 I considered myself a socialist long before I joined the Socialist Party. Socialism embodies my values - equality, compassion and justice.

But I come from a family of Labour supporters, and had always thought Labour shared my views. Seeing Jeremy Corbyn lead the Labour Party convinced me more of this than ever.

But that changed with Labour's treatment of Jeremy Corbyn. Labour was moving towards the centre and leaving me behind as it went.

I felt very disillusioned. I couldn't see anyone representing people like me. It was a very lonely place to be.

I considered the Greens, a left-wing option presented in the media. Their positions on funding the NHS, the environment, tuition fees and tax were what I wanted to support.

But this was what I had seen in Labour. The Greens didn't provide a rationale for why they would be any different.

Labour want to appeal to top earners who don't want to pay more tax, big business who don't want to be nationalised, and landlords. Those who think it is acceptable for individuals to profit from the work and needs of many - capitalism.

Labour wasn't going to fight these individuals or the 'structure' that supports them, but rather seek compromise. There is no compromise between capitalism and my values.

The only party offering an actual uncompromising solution is the Socialist Party. Since joining I have found people who share my values.

I have also learned so much about politics, and changed many of my own positions. I feel reinvigorated to fight for what I believe in, and I enjoy being educated and challenged.

I have a new lens to view the world and feel more sure of what the solutions need to be.