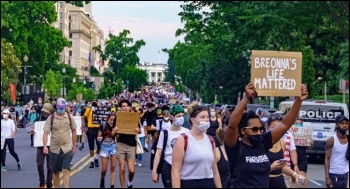 Earlier, Formula One (F1) racing star Lewis Hamilton was reprimanded by the F1 governing board after posing in a T-shirt with the slogan: 'Arrest the cops who killed Breonna Taylorť.

Military forces have been deployed in Louisville, hundreds of demonstrators arrested, and a weekend citywide curfew imposed. Black Lives Matter (BLM) protesters were incensed when an extremely provocative far-right militia was allowed to march in the city.

Breonna was shot dead last March, when police forced an entry into her flat using a 'no-knock' search warrant.

No-knock forced entry is a recipe for bloodshed. In Houston, Texas, in 2019, two people were killed and five police injured during a no-knock raid during a search for drugs. None were found, and police said the warrant was based on an officer's false information! No-knock has now been banned in Louisville, but not in the state of Kentucky.

Donald Trump has deliberately sympathised with police and far-right militias in order to promote his presidential campaign propaganda of restoring 'law and order' in Democrat-run cities. He is hoping to frighten voters into supporting him by claiming that victory in November's election of Democrat candidate Joe Biden would lead to 'violence and anarchy' in US cities.

Of course, Trump conveniently ignores that facts that BLM protests have been overwhelmingly peaceful and that he has encouraged violent counter-protests.

Trump's language is taken straight out of Republican Richard - 'Tricky Dicky' - Nixon's 1968 'law and order' presidential campaign speeches, aimed at the 'silent majority'. Then, similar to today, US society was highly polarised, set against a backdrop of the assassination of Martin Luther King, and the civil rights and anti-Vietnam War movements.

However, the alternative capitalist party, the Democrats, not wanting to appear 'soft' on law and order, has been quick to clamp down on BLM protests and implement citywide curfews and mobilisations of the national guard, etc.

What's needed is a new working-class mass party, independent of the capitalist establishment, that can unite around a fighting programme to deliver economic, social, and racial justice by promoting socialist policies.

Disappointedly, former presidential hopeful and self-declared 'democratic socialistť, Senator Bernie Sanders, has now failed, on two occasions, to offer such an independent working-class alternative, and has instead lamely backed the establishment Democrats.

Nonetheless, the task of linking up BLM with organised labour to create such a new party remains firmly on the agenda, given the likelihood of new movements and struggles, whoever enters the White House after November.