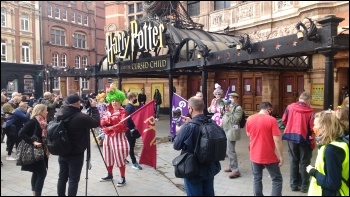 A parade of pantomime dames and theatre workers marched through London on 30 September to demand emergency funding for the arts. The entire live performance sector has closed with little or no support.

Actors, designers, directors, stage managers, technicians, and more pounded through the West End to show tunes. One protester's placard read: "22 years a stage manager - it's not just my job, it's my life!"

Dames lifted their fists at Trafalgar Square and Downing Street. Marchers chanted: "Theatres should stay shut! / Oh no they shouldn't! / Oh yes they should!" - you get the picture.

Performing arts union Equity and technicians' union Bectu called the demonstration, alongside industry group #WeMakeEvents and campaign group ExcludedUK. The National Shop Stewards Network was among supporters, marching in solidarity with a banner. The core demands of the 'Panto Parade' were:

Socialist Party members in Equity agree with these demands. We would add that the spasmodic, dysfunctional character of the pandemic market means many arts organisations are already doomed. The only way to save and rebuild the industry is by extending public ownership - a model which already exists in the union's 'Performance for All' policy document.

This is the first independent action Equity has called in recent memory, and a very good first step. It should signal a change in approach to more combative campaigning by the union.

Equity's general secretary-elect, Paul Fleming, gave an energetic speech which asked: "Who do we as a society think should be an artist? All we're saying right now is: people who can afford to do it."

He was, however, followed by a major theatre producer who praised the campaign's "unity" between employers and unions. Our interests happen to coincide on this issue - but this temporary "unity" must not set the tone. The impresarios' profits are based on poor pay, conditions and job security for most workers.