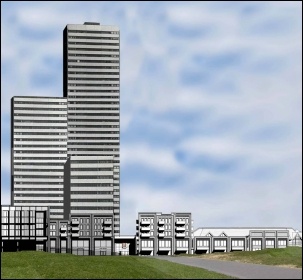 A 29-storey residential skyscraper which fails to meet 'affordable housing' targets has been approved in the outer London borough of Enfield, in the teeth of protests from housing campaigners and resident groups.

This is one of a series of planning decisions in London that will please super-rich developers but present no hope for the homeless and badly housed.

Situated next to a busy dual carriageway that children will have to cross to reach play areas, the tower will have no social-rent homes or even homes at the higher London Living Rent.

Campaign group Better Homes Enfield say nine out of ten of the homes would be unaffordable to the majority of local people, only 8% would be at 'London Affordable Home' rates.

In Enfield, 5,000 children live in temporary accommodation, 11% of households are officially recognised as living in overcrowded conditions, and first times buyers have to stretch to spend eleven times their salary.

It wields huge political power, which is no doubt why it thought it worth paying Tory ex-chancellor George Osborne £650,000 a year for working just four days a month. According to the Financial Times, its boss Larry Fink is the highest paid in the sector, raking in about $24.3 million last year - plus about $50.8 million in stock awards: the pay-out to the politician will seem like chicken feed.

Labour councils are elected to stand up to corporations and fight for working-class communities. In Enfield they should speak out for social housing. If they fail in this, they should be challenged in elections by candidates who will.

The deepening housing crisis in the UK reflects government support for finance and a woeful lack of social house building. Labour was committed to a mass programme of council house building under Jeremy Corbyn, but Keir Starmer has refused to commit to continue that policy.

It is now more urgent than ever to take over the banks and finance companies that were rescued in the financial crash and launch a programme of house building at truly affordable social rents.