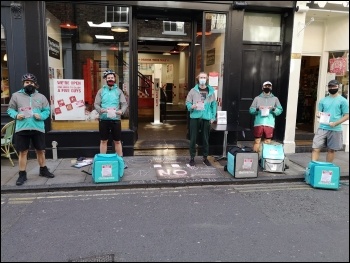 The couriers have also not been accepting deliveries on a number of days saying they can be kept waiting for up to 40 minutes to collect the food - which they don't get paid for.

Speaking outside restaurant chain Five Guys, one Deliveroo courier said: "We are not paid our waiting times - and that is not good enough.

In some cases riders will only be making one order in an hour and earning less than £4. How are you supposed to raise your children or pay your rent on that kind of money?"

The workers are members of the IWGB union's couriers and logistics York branch, which said it has tried negotiating with regional managers, and has sent a letter to the Five Guys CEO "to no avail".