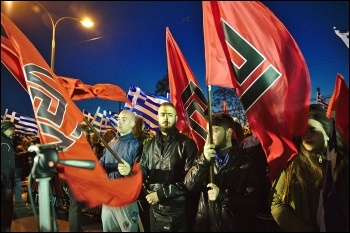 Outside the court in Athens, 15,000 anti-fascist protesters celebrated the news, displaying slogans such as "Pavlos lives, crush the Nazis" and singing the revolutionary song Bella Ciao. The police used water cannons and tear gas to disperse them.

There were 68 defendants in the trial, including the entire leadership of the organisation and all of their former MPs.

However, the state prosecutor had been roundly criticised for earlier opposing the banning of Golden Dawn, arguing that the criminal acts committed should be 'crimes of individuals'.

While the Greek state authorities have been forced by popular mobilisation to prosecute Golden Dawn for some of its worst crimes, we cannot rely upon the capitalist state anywhere to face down fascism. What is required is for workers to organise in a united front involving socialist political groupings and trade unions to defeat fascism on the streets, in the workplaces, and in the communities.

But fascism's permanent defeat will require the overthrow of capitalism and instituting a socialist economy and society, thereby eliminating the social basis of fascism.

Golden Dawn was the third largest party in the Greek parliament in 2012, but had lost all of its seats by the 2019 election. The organisation had consciously exploited the deep economic crisis faced by the country, the anger of the working class at austerity and the political establishment, in order to promote its far-right agenda.

Golden Dawn used the capitalist crisis to blame and attack migrants and the left, and to harvest the feelings of despair felt by sections of the working class and poor following the country's economic devastation.

Many working-class people at that time turned to the left-wing political party Syriza, which rejected austerity and the threats of the 'Troika' (the European Commission, European Central Bank, and International Monetary Fund).

Syriza was elected into power to great enthusiasm in 2015. It brought forward a referendum to decide whether or not Greece should accept the bailout conditions proposed by the EU and the IMF, where the conditions were outright rejected by 61%, and a no vote coming out on top in every region of Greece.

Scandalously, Syriza ignored the results of the referendum and entered an agreement with even harsher austerity than had been previously discussed! This represented another betrayal of the working class, and led to massive disillusionment that Golden Dawn were, in part, able to tap into.

Golden Dawn's support has dramatically decreased in recent years, and its appeal has been somewhat eclipsed since the election of the New Democracy right-wing government in 2019. But we cannot be complacent about the threat Golden Dawn and other fascist organisations around the world pose to the working class.

The far right aims to stoke divisions in working-class communities often by using fears over jobs and housing, fears that are heightened during a recession, to draw lines through communities on grounds such as race, ethnicity, sexuality and gender.

The best way to ensure homes, jobs and services for everyone, is for the working class of all nationalities, ethnicities, sexualities and genders to unite and build a powerful movement for change. The trade union movement, that Golden Dawn and other fascist elements correctly view as a threat to them, has a key role to play in unifying the working class to fight for better lives and to reject fascism.

The rise of Golden Dawn in Greece and the rise of the far right in other countries clearly show the need for an organised fight back, including the use of self-defence stewards when necessary, by the trade union movement and the left.

The far right and fascists are organised, it is essential that we are too.