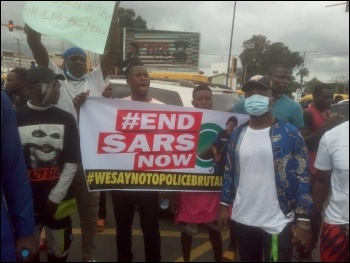 The Democratic Socialist Movement (DSM - CWI in Nigeria) welcomes the news of the dissolution of the infamous and loathed Special Anti-Robbery Squad (SARS) by the Inspector General of Police (IGP). This follows days of spontaneous protests by young people, nationwide.

The anti-poor and repressive Buhari capitalist government did not grant this concession easily. The protests, which the DSM was part of, were viciously repressed with at least one protester shot dead in Ogbomosho and several injured across the country, including journalists.

Therefore, the commendation for this concession goes to the young people who invested enormous energy, sacrifices, sweat and blood across the country for this to happen.

While welcoming the dissolution of SARS as a victory for the struggle, we must quickly add that it falls short of what is required to achieve the full aim of the #EndSARS movement - which is an end to police brutality and a just and equitable Nigeria, where citizens live and can carry out their daily legitimate activities without fear of harassment, illegal arrest and detention, extortion and extra-judicial killing by security operatives.

We disagree with the decision to redeploy operatives of SARS to "other Police Commands, Formations and Units" without first and foremost investigating the unit to determine the role of each of the officers in the assault on people's democratic rights and severely punishing those found culpable.

We therefore call for an independent panel of public inquiry composed of elected representatives of youth, trade unions and pro-masses organisations. Those found guilty should be severely punished. Without doing this, the Buhari government would be letting loose embittered and vengeful defunct SARS operatives on society.

Secondly, the pronouncement from the IGP did not address the question of the egregious attacks on the fundamental rights of peaceful protesters by the police.

The #EndSARS protests have proven the leadership of the Nigeria Labour Congress and the Trade Union Congress wrong that struggle does not pay. These organisations scandalously betrayed the 28 September general strike and won nothing in return. Instead, they gave a blank cheque to the federal government to continue to increase the price of fuel through their acceptance of deregulation.

More than ever before, we need a mass democratic and fighting labour movement with a militant and Marxist leadership.