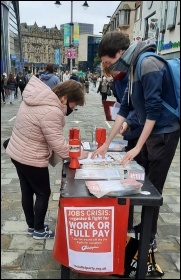 A Socialist Party stall in Newcastle, October 2020   (Click to enlarge)

Yet again it's working-class people who are paying the price for the Tories' mishandling of the Covid pandemic.

The government has tried to put the blame onto 'irresponsible' students - who were lured to university with false promises of a normal student experience - or onto ordinary people not following rules that nobody understands anymore. Anything to stop working-class and young people uniting together against the real culprits - Johnson's Tories.

The second wave isn't the fault of ordinary people who are doing their best in difficult circumstances. It isn't even mainly due to government incompetence - although there's plenty of that around. It's the inevitable consequence of policies that prioritise the profits of a rich minority over the health and wellbeing of the majority.

It was in pursuit of profits for their big business friends that the Tories simultaneously forced children back to school and workers into the factories and offices - crammed onto public transport - without an adequate test-and-trace system in place. And the testing shambles is the result both of years of underfunding and the Tories handing out contracts to private companies like Serco to make a killing, rather than fully fund established publicly controlled local test-and-trace systems.

The fear and anger from below is reaching boiling point, especially in the North, and causing the cracks and fissures above to widen. 'Red wall' Tory MPs worried about losing their seats are openly attacking Tory MPs on the right of the party.

Even Labour leaders are feeling the heat. 'National unity' over Covid is fraying at the edges. The Labour-led Welsh government has introduced a 17-day 'firebreak' (see p3). Keir Starmer has finally, albeit timidly, opposed Johnson by calling for a mini-lockdown 'circuit breaker', although at the same time telling Labour MPs to abstain on a vote that will allow 'spycops' to infiltrate trade unions and workers' organisations, as well as murder with impunity.

But a serious national campaign now, led by trade unions and mobilising local communities around the demand of 'work or full pay', could force the Tories into backing down over the furlough scheme. It could also lay the basis for a fight to oppose all cuts, and win the money necessary from the Tory government to fully fund local jobs and services. That fight would include standing trade union, community and socialist candidates against pro-austerity councillors in elections as a step towards the building of a new mass workers' party that would fight for the interests of working-class people, not big business and a rich elite.