News has emerged from Nigeria of a massacre of unarmed protesters by the military at the Lekki toll plaza in Lagos. Instead of taking action against the perpetrators, President Buhari has remained silent. The Socialist Party will be organising solidarity protests, and updates of the situation from our sister organisation in Nigeria (Democratic Socialist Movement) will be carried on socialistworld.net

In Nigeria, a spontaneous protest movement, of mainly young people, against police brutality - which has braved water cannon, tear gas, live rounds, and at least 15 deaths - succeeded in forcing the government to disband the notorious Special Anti-Robbery Squad (SARS). But almost immediately, the police chief said SARS members would be reincorporated into the police, and a new militarised SWAT unit established. This has reignited the protests. Soweto, a leading member of the Democratic Socialist Movement (CWI Nigeria), from Lagos, spoke to the Socialist about the current turbulent events. 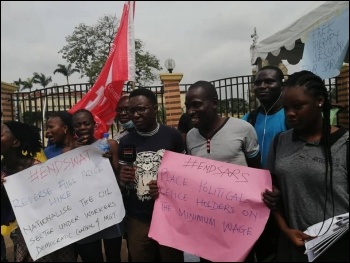 Soweto explained that the spark which lit the protests was video footage from 3 October that went viral. It showed a young man being arrested and then shot dead by a SARS member. The police then drive off with the young man's car!

Young people being targeted by police is, however, not new - SARS has been around since the early 1990s. But today, if a young person is driving a car, carrying a laptop or smartphone, they are automatically branded a criminal and face extortion, arrest, and even extrajudicial killing by the police.

Soweto pointed out that there have been previous protests against SARS and police brutality, but the movement has ignited now because of a wider social, economic and political crisis in Nigeria.

In these protests, issues like lack of jobs, corruption, bad roads, and no electricity, have come to the fore. A recent employers' organisation report stated that 102 million Nigerians, nearly half the country's 205 million population, live in "extreme poverty". For youth, the situation is dire. Just 14.7 million of the 40 million 15-34 year-old Nigerians eligible to work are employed.

The Buhari government, despite its pledges on first coming into office in 2015, has utterly failed to tackle these and other pressing social issues, such as the chronically underfunded healthcare and education systems. To make matters worse, the government has recently hiked fuel prices and electricity tariffs. All this while wealth inequality between rich and poor has massively widened. 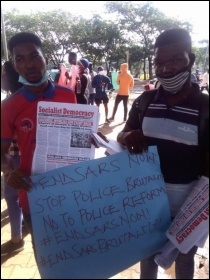 DSM members on the streets in Abuja   (Click to enlarge)

This latest assault on living standards led to widespread anger among the masses, which pressured the leaders of the Nigerian Labour Congress and Trade Union Congress to call a general strike in September in opposition to subsidy cuts, price and tax hikes, and delays in minimum wage implementation. But, at the last minute, the leaders called off the strike and accepted the capitalist government's argument that Nigeria's 'dire financial circumstance' meant the 'inevitability of deregulation'.

As the Socialist reported at the time: "In Benin City and Ibadan, trade unionists and others rapidly took to the streets to protest at the national leaders' decision. In other cities there were stormy meetings of activists."

Soweto pointed out that this leadership sell-out (and previous ones) has meant that among young people there are suspicions about, and even hostility towards, the labour movement, alongside widespread rejection of the main political parties.

The Democratic Socialist Movement has taken the initiative to launch the Youth Rights Campaign (YRC), that has a political programme to end police brutality, and also addresses wider questions about fighting unemployment, poverty, etc. The YRC is active in the protests, distributing leaflets and participating in debates.

The YRC is calling for a 48-hour solidarity general strike as the next step. And if the bureaucratic leaders of the trade unions won't act, they say an appeal should be made to the rank-and-file members to strike.

Soweto explained that part of the problem of this spontaneous movement is a lack of democratic structures to enable participants to debate what programme of demands is required to fundamentally change the situation, and also to make the movement democratically accountable.

For example, Soweto mentioned that members of the military have been posing on the protests as supporters of the youth and the people, and against the police.

He pointed out that since the country achieved independence in 1960 the military has played an anti-democratic role through coups and repression. But now the government combines offers of concessions with hints of threats. The information minister is claiming that the "protests had been hijacked by hoodlums and people with an ulterior agenda".

A programme that deals with repressive state forces automatically challenges the rule of the capitalist elite; an elite that is rotten and corrupt, and has siphoned the wealth generated from the country's oil revenues.

Thus, the fight for democratic rights is linked with that for socialist policies to transform Nigeria from a hugely unequal capitalist society to a democratic socialist one, that can utilise the vast human resources and natural wealth to benefit all.

However, Soweto emphasised that such a transformation can only come about through a mass socialist movement leading to the coming to power of a government representing the working class and poor. This is why the DSM helped initiate the broad Socialist Party of Nigeria to raise support for socialist ideas and the building of a workers' party that struggles for them.

The Socialist Party is encouraging Socialist Students, Young Socialists, and trade unions in England and Wales to show solidarity with the Youth Rights Campaign in Nigeria. Email YRC: [email protected] 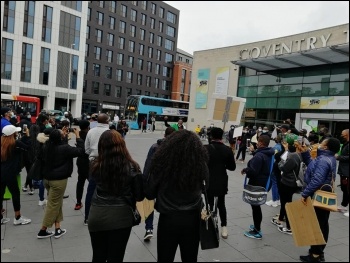 In Coventry, hundreds of mostly black youth gathered in solidarity with protests against police brutality in Nigeria. We marched across the city centre with chants like "End SARS!" and slogans in regional languages like the Yoruba phrase "Soro Soke Werey" - I was told the polite translation is a rallying cry to "Speak up, idiot!".

I brought leaflets from the Youth Rights Campaign in Nigeria, which calls for a 48-hour general strike with mass protests, and for "an equitable, safe and democratic socialist society where everyone, old or young, can live and go about their daily legitimate activities without fear of molestation, illegal arrest and detention, extortion and extrajudicial killing." 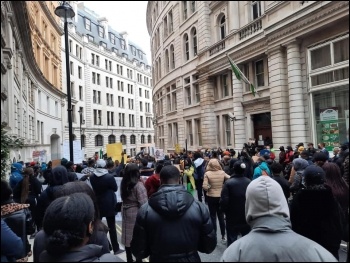 On 18 October, a large and lively demo in London, mostly young, marched from Marble Arch to the Nigerian embassy, to protest police brutality against young people and workers in Nigeria. Some protesters were holding placards that read "capitalism is a racist system."

Passionate speeches were delivered at the beginning of the demonstration, which reflected the anger of Nigerian youth and their determination, not only to scrap 'Special Weapons and Tactics' police units, but also to bring an end to the Buhari government and the corrupt capitalist system with it.

Socialist Party members sold copies of the Socialist, and distributed leaflets from the Youth Rights Campaign, a platform launched by CWI members in Nigeria.