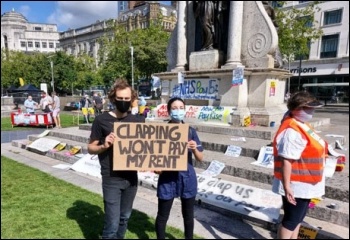 So, there's a shortfall of over £1 billion in funding for the NHS in England; so say health officials to the Guardian. If NHS bosses and Westminster politicians could see what things are really like in our hospitals, they'd realise we're a lot more hard up than that!

Labour politicians say there's been ten years of acute underfunding, staff shortages and bed cuts. But the cuts and crazy privatisation go back much further than that - including their own years in power.

We were told by Chancellor Rishi Sunak back in March that the NHS would get "whatever resources it needs" to get us through the pandemic. The Tories' speech writers must have been working overtime for all the clever, meaningless soundbites they produced.

We are not 'in it together'. MPs have had their big pay rise and extra resources to work from home. We've had no real pay rise, and any new money has been stolen from somewhere else in the service.

It reminds me of my grandmother saving money in jars on the mantelpiece and then having to hide when the rent man came because that money had gone to put food on the table.

We have stolen from the jars named 'hip replacement', 'new heart valve', 'breast screening' and so on, dealing with the onslaught of coronavirus.

In the last couple of months, we've been trying to catch up on so-called 'routine' surgery. But this catch-up drive is now meeting head on the second wave of the pandemic.

Every year we are fearful as we move towards winter. Last year took a herculean effort to cope with every 'Code Black', every closed or overwhelmed A&E, every bed closure. And that was without Covid.

We feel we have nothing more to give. We are tired. Depression and stress levels are at record levels among health workers and many would leave if they could afford to.

This is no way to run a health service - billions are siphoned off by big business through private suppliers, leeches who bleed the service dry. We need a massive injection of cash to keep vital services going while we treat increasing numbers suffering from Covid-19.

And as for the tiny handful who've managed to climb the greasy pole - who refuse to lead a fightback while collecting big fat salaries as MPs or union leaders - we don't need your platitudes. Of course you feel 'we're all in it together' with the Tories!

If you aren't prepared to lead us into struggle to fight for decent resources and pay, move over for someone who will. We need leaders who will fight - like Hugo Pierre, standing for general secretary of public service union Unison. We need coordinated industrial action for a 15% pay rise, and a fully funded, publicly owned NHS.