Locked out, but we still marched to campus 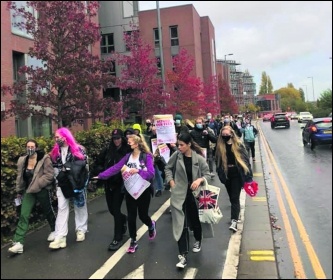 After growing discontent among students and staff, Birmingham Socialist Students called a march on 21 October. Students arriving in Birmingham were met with an almost immediate reduction of contact hours, restricted library access, and extremely limited contact with university representatives.

Faced with these restrictions, and having to isolate for 14 days with inadequate support, the mood on campus was one of dissatisfaction. For weeks students have taken the brunt of the Tory blame game, in spite of the government's disastrous and neglectful handling of the pandemic that only serves the interests of the profiteers.

So Socialist Students announced a protest - demanding student fees are refunded and for free education in general - and campaigning for two weeks to ensure a strong turnout began. Students leafleted in areas with large student populations - halls of residence, the local high street, surrounding residential areas, and spaces around campus.

We placed posters along the main roads every few days. And students kept a strong social media presence with regular Facebook updates. Our protest gained traction, and an article from the Birmingham Tab student website boosted exposure.

On the day of the demonstration, 80 protestors came to the student university entrance. But peaceful protestors were locked out by security, so we took an alternate route to campus.