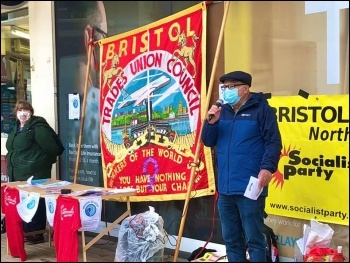 Bristol and Gloucester Unite Community held a rally for jobs in the centre of Bristol to protest against mass unemployment on 24 October. Speeches caught the attention of shoppers - one of those who stopped described it as "the most sense he'd heard all day."

We encouraged people who weren't in work to join Unite Community, but we stand with the rest of the trade union movement in fighting to save jobs.

The rally was a week before the Tories were set to end the furlough scheme. This will see a further spike in job cuts.

Furloughed workers face an uncertain future. They have suffered a 20% pay cut for months.

From November, fewer workers will get support, just two thirds of their wages, but still face the same rent and bills. We called on the government to keep a job retention scheme, supporting workers with 100% of pay.

Speakers at the protest highlighted the hypocrisy of MPs denying health workers a pay rise despite being in line for a £3,300 raise themselves. MPs voted to leave kids hungry over Christmas, but the fancy food they eat in parliament is subsidised by the taxpayer.

These politicians don't care about us, they stand with the bosses who are making redundancies and using mass unemployment to attack pay and conditions for those still in work.

Capitalism is run by these bosses who demand more and more from workers, then throw us on the scrapheap without a second thought when we're no longer profitable for them.

The workers' movement must fight for decent jobs for all, and not let mass unemployment divide our class, blight our communities and scar the future of a generation.