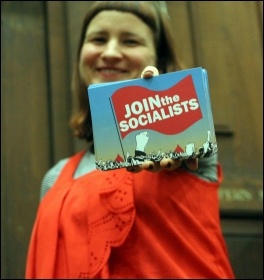 When asked by a student what the first sign of a civilised society is, anthropologist Margaret Mead's answer was a healed thigh bone. Animals, Mead explained, don't help each other in the way that civilised humans might. When an animal breaks its leg, it dies. Yet at the beginning of human society, people cared enough to stay with their sick and help them heal. Even the cavemen took better care of people than our current capitalist system!

I was born into a world that's on fire, while people with all the money and power to fix it, simply ignore the issues staring them in the face. I want a world where I can grow up free from hate, inequality and oppression, where massive wealth isn't hoarded by the few to the detriment of the rest.

But when I tried looking to our leaders for the answers, all I saw was them making the problem worse. After looking into my options, I settled on the conclusion that if we are to keep our humanity and civilisation, socialism is the only way forward.

We as humanity have one goal: to help others and ourselves to the best of our abilities. Our ancient ancestors knew this, but under capitalism, this is ignored. I'm obviously not advocating a return to the time before antibiotics and toilet paper.

But one simple truth can't be denied: under the capitalist system, our rulers refuse to do the one thing most intrinsic in every person, care for each other. We need to remember how, and that requires socialism.