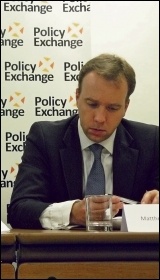 Matt Hancock, with his sickly insincere smile, retorted that £63 million had been given to local councils, which could be used to help children over the holidays who get free school meals.

That's the same £63 million that government ministers say should be used for the multitude of extra services needed to fight this pandemic. It's all smoke and mirrors.

And of course, to us £63 million sounds a lot of money, but in terms of government spending it's loose change. Remember this government forked out £522 million for the 'Eat out to help out' scheme; some of that money would have been used to prop up Michelin star restaurants.

And £137 billion was used to bail out the banks after the crash of 2008. The money is always found to look after the interests of big business. Yet when it comes to ensuring children won't go hungry, BoJo and Co aren't prepared to fork out a measly £20 million.

I don't often get angry, but I'm angry at the callous indifference of this cruel Tory government. But it's not enough to be angry, we've got to be organised!

It's great that people have stepped up to help feed kids in the half term. In the words of The Guardian: "Marcus Rashford is actively outlining how an alternative society could work." Well, not quite, but I get their point.

However, the welfare system was built by angry and insubordinate men and women, politicised after the war. No small part in their rage to change the philanthropic model, was the humiliation experienced by working-class families in the hungry 30s and its inadequacy.

The Tories have pinched our money and cut welfare to our people when they fall on hard times. Feed the hungry children. Restore decent welfare provision so families can feed themselves.

Rights not charity. Socialism not barbarism!

Maybe all the parents who can't feed their kids in the holidays should be allowed to go to Tesco and get a load of food for free, since the Tories gave them half a billion in tax relief this year.

Forced back to dangerous work

As a 62 years-old diabetic mini-cab driver, I isolated from 23 March on 80% earnings because of the obvious risk to myself. I thought that if I stayed away from work and got by on the 'self-employment income support scheme' (which was reduced to 70% after 3 months), then a 'track-and-trace' mobile app would get set up, at least informing me if I'd been in proximity of infected passengers. Now that the 70% is coming down to 20%, and facing mounting bills, I'm forced back to the second most dangerous occupation against my will. If I could wish away the next 3+years and qualify for my pension, I would.

Boris Johnson, when he first stood for London mayor, condemned any extension of the congestion charge as an intolerable outrage against motorists' liberty. Now the Tories want to extend the charging zone well out into the suburbs, to plug gaps in Transport for London funding, so that office workers can get into the central business districts.

With each passing day Johnson looks more useless. It's like watching several hundredweights of condemned meat stuffed into a suit, with Dominic Cummings' hand up the back as a ventriloquist, but he's transparently not even competent to crank out a voice-throwing act on the radio.

What will current mayor Sadiq Khan do to fight this government's attack on TfL? He might grumble, but shows no sign of mobilising a real campaign of opposition.

That's right you read correctly. Rishi Sunak specifically stating the Tories are happy to let people die in order to keep their big business pals making profits. The craven lack of any compassion for working-class people is exposed every day. But when they come out and straight up say it, this must be the time to take action. Time for unions to take a lead and say: "Our members must not be lambs to the slaughter." Time for workers to stand up against these pitiful creatures that worship and protect capitalism.