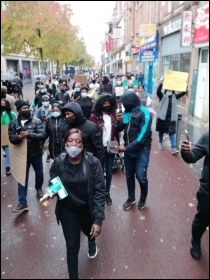 Socialist Party organiser Tessa Warrington discussed the anti-SARS protests with a Nigerian student at De Montfort University, Leicester, who is co-organiser of the #EndSARS solidarity protest.

We are here in solidarity with our brothers and sisters at home in Nigeria. People came out onto the streets yesterday (21 October) after brutal state killings of peaceful protestors.

SARS is an extremely corrupt armed wing of the police. It targets young people - anyone with tattoos or an iPhone, who looks like they may have money. They march them to ATMs and demand they withdraw cash for them, sometimes in excess of 200,000 Naira (£400). They caught my brother and demanded my family pay 100,000 Naira. We negotiated less, but it was still not money we had to spare. I am afraid for my family right now.

SARS lock people up just because they can. They kill indiscriminately and throw away the bodies to hide the evidence. It is a reign of terror.

The Lagos government suddenly introduced a 4pm curfew to try to stop the protests. There are little to no traffic management in Nigeria so it was impossible for workers to make the journey home by this time. If anything, it encouraged the protests, as it was seen as dismissal of the movement and a threat of more repression.

Then yesterday (21 October), the military, unprovoked, opened fire on protesters in Lagos doing nothing more than singing our national anthem and waving our flag!

There was also shooting into crowds of protesters at the Lekki Tollgate the previous day. The military shut off the lights to intimidate and scare people. On October 23 Buhari himself said 51 civilians had been killed nationally. At least 78 are now dead and the number is rising. Sanwo-Olu, governor of Lagos state, tried to deny that the Lekki killings had happened, but the attacks were being live-streamed on Instagram!

The reality is that the government is hand in hand with SARS. It is clear that they take a cut of the extorted money; they cannot deny it. That is why SARS feel they can act with impunity. I have heard experiences from Nigerians back home of SARS officials saying 'I will kill you and nothing will happen'.

Not one member of the government has spoken out against these actions. This experience has completely disillusioned Nigerians with the corruption of our black leaders. They have treated us the same as any white oppressor would.

The demands of our movement began with the bare minimum - not to be killed! Now the anger is huge and the protests will not stop. This will undoubtedly lead to more state violence, but we want to show the world what is happening in Nigeria.

We need an end to SARS and Swat. We need total reform of the police from below. But we also want government officials, like President Buhari and Sanwo-Olu, who have been complicit in this state terror to resign. They are only concerned with money, with enriching themselves. We need a leadership that comes from the movement, from the youth and community and who know what our lives are like and stand with us.