Link to this page: https://www.socialistparty.org.uk/articles/31576 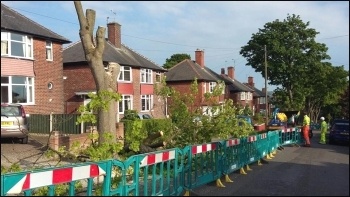 The long running Sheffield tree-felling saga took another twist. Thousands of healthy trees were felled under the privatised Streets Ahead programme between 2012 and 2018

Seven trees were felled on the Rustlings Road, which caused particular anger locally and provoked large protests. Road work began in the early hours of the morning, accompanied by a large police presence.

Following a complaint by a member of the public, who has sadly died in the meantime, the Local Government ombudsman issued a damning report. The report accuses the Labour council of "misleading the public", "lack of honesty", "misrepresenting expert opinion", and making unsubstantiated claims about accidents and damage caused by trees on the road.

The report also questions claims by the council that South Yorkshire Police supported their plan for a night raid. The ombudsman's report tells the council to make an unreserved apology.

In summer 2017 the council spent hundreds of thousands of pounds securing a High Court injunction against protesters preventing tree felling. Four people received suspended prison sentences for continuing to peacefully do so.

The felling programme was 'paused' in March 2018 and never resumed.

Campaigners have long called for an independent inquiry into events. Lessons need to be learned to prevent similar things happening in Sheffield and elsewhere.

The use, by a Labour council, of legal force and heavy-handed policing to enforce privatisation has caused anger. Labour has lost council seats over the last couple of years, and is set to lose overall council control next May.

Many leading figures pursuing the policy - councillors and unelected officers, have either taken early retirement or been moved to other roles. The language from Sheffield City Council has softened in recent times.

But the calls for an inquiry and justice for those affected is louder than ever. The tree felling is now a bitter memory, but the fallout continues to haunt the Labour Party locally.