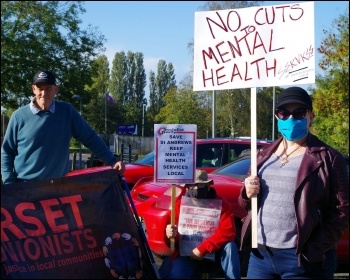 The last 14 beds for inpatients at St Andrews mental health ward in Wells, Somerset are set to be moved. After ten years of successive cuts this is all that's left of what used to be 60 beds. After a public consultation that started in January, 75% of residents opposed the Clinical Commissioning Group (CCG) plan to move the beds to Yeovil, over 30 miles away.

70 people attended a demonstration on 24 October, with support from Mendip and Somerset Trades Union Councils, mental health professionals who work in Wells, and Unite the union members. I spoke on behalf of the Socialist Party, and raised the need for frontline NHS workers and community groups who use the services to have democratic control of planning health services.

In January, I was one of the founding members of a Facebook group 'Save Somerset's Community Services'. The group now has 720 members. In a Zoom meeting discussing the consultation at the beginning of September, the CCG claimed that the fact that local people were opposed to the plan would not change their decision.

Tory MP James Heappey said it was not a financial decision, but one based on the advice of medical experts. He claimed that there was nothing he could do. Since when have Tory politicians listened to expert advice regarding health?

Our campaign group has written letters to local newspapers, the CCG and Heappey demanding that, during the current Covid crisis, St Andrews ward should have its capacity and local crisis teams increased. We currently have an online petition running that has over 1,200 signatures.

Mid-Somerset Socialist Party branch members are active in the campaign, and support the demands of the group to increase beds in St Andrews Ward and stop the closure. We demand an increase in the number of crisis teams to improve early intervention. Mental health services should be provided by the NHS in-house and expanded across the whole of Somerset.

We have more protests planned and will continue leafleting, offering support to any action that staff take to save St Andrews Ward.